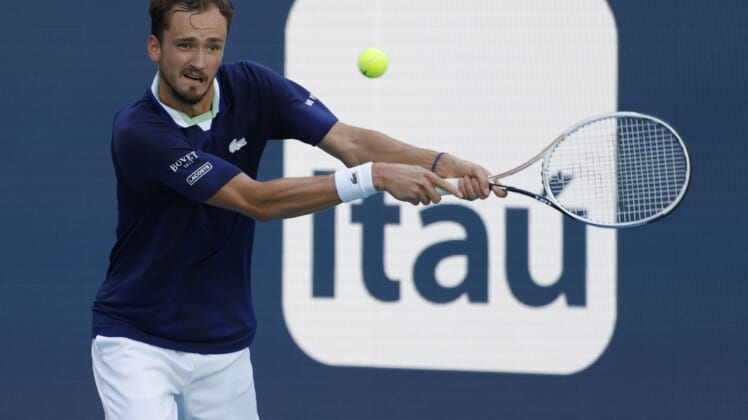 Daniil Medvedev’s path to regaining the world’s top ranking runs straight into the defending champion of the Miami Open.

Medvedev, the 26-year-old Russian who is the tournament’s No. 1 seed, charged into the quarterfinals with a 7-5, 6-1 victory over the United States’ Jenson Brooksby on Tuesday.

Next up for Medvedev is a matchup against eighth-seeded Hubert Hurkacz of Poland, the reigning Miami Open champion. A victory in that match would assure Medvedev of moving back to No. 1 in the world next week, ahead of Novak Djokovic. The Serbian star is absent from Miami, as he was earlier this month from the BNP Paribas Open in Indian Wells, Calif., because he is unvaccinated against COVID-19.

Brooksby, who is ranked 39th, started well against Medvedev. The 21-year-old Sacramento native broke serve in the first game and led 5-3 in the opening set. However, Medvedev won the next four games to take the set, then jumped out to a 3-0 lead in the second set and wasn’t threatened again.

“Jenson has the potential to be a top player,” Medvedev said postmatch. “He is really good and plays better than his ranking. I knew it was not going to be an easy match. I had no solutions at the beginning. The crucial moment was when I managed to make him serve for the set and he got a little bit tight and I played a bit better.”

Medvedev finished with an 8-0 edge in aces, and he converted all four of his break points.

“Sometimes I am not that intense on court, so today I tried to pump myself up,” Medvedev said. “I had to try and close it out as fast as possible. I had to fight for every point.”

Three other players moved into the quarterfinals with straight-set wins.