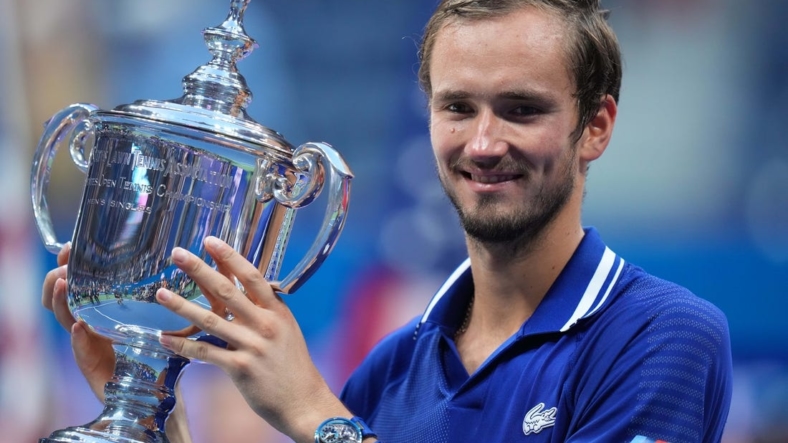 Daniil Medvedev will open the defense of his U.S. Open title next week against American Stefan Kozlov, while Rafael Nadal is on a collision course with Carlos Alcaraz, who is set to succeed him as Spain’s top tennis player.

The pairings were released Thursday, and they are filled with challenges for some of the top players in the draw. The U.S. Open begins Monday at Flushing Meadows in New York.

Medvedev, the top seed, defeated Kozlov 6-2, 6-2 in Wimbledon qualifying in 2016, the only time they have met as pros. Wins in the early rounds could set up a clash between Russia’s Medvedev and Australian Nick Kyrgios — the runner-up at Wimbledon — in the fourth round.

No. 2 seed Nadal, who will attempt to win his fifth U.S. Open title and 23rd Grand Slam championship, will open against Australian Rinky Hijikata, A win could set up a tough second-round match against Italian Fabio Fognini, who defeated Nadal in five sets in 2015 at the U.S. Open.

Alcaraz is the No. 3 seed and will meet Sebastian Baez of Argentina in the first round. The 19-year-old Alcaraz and his idol, the 36-year-old Nadal, are on the same side of the draw and could meet in the semifinals.

Stefanos Tsistipas of Greece landed as the fourth seed, with Norway’s Casper Ruud the fifth.

The field this year lacks some of the biggest names in men’s tennis. Roger Federer, a five-time winner in New York, is out as he continues to recovery from knee surgery. Novak Djokovic can’t play because his lack of vaccination against COVID-19 violates travel rules. And World No. 2 Alexander Zverev is not ready to return to the court after suffering a serious right ankle injury while playing Nadal in the semifinals of the French Open in June.

The tournament also will be a battle for No. 1 in the world.

Alcaraz also could become the youngest-ever men’s No. 1. And Medvedev, Tsitsipas and Ruud also are part of the five-way race to No. 1.

Because of the way ranking points work, the ratings will change on Monday.