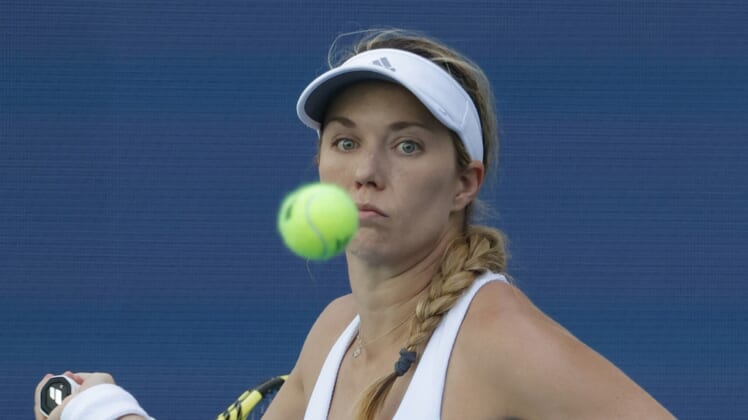 Ninth-seeded American Danielle Collins fought through neck issues Saturday while recording a 6-1, 6-4 victory over Russian qualifier Vera Zvonareva in the third round of the Miami Open.

Collins took a medical timeout to get the neck worked on during the second set. After receiving treatment, she cruised through the final three games to close out the match.

The 28-year-old Collins had four aces in the 78-minute match. After a first-round bye, she has won both of her matches in Miami this week after missing five-plus weeks with a viral illness.

Collins told the Tennis Channel that the neck issues emerged during her bout with the viral illness and haven’t gone away.

I woke up a few weeks ago and couldn’t move my neck for a few days,” Collins said. “I got better and it seems like it is getting better but once I start playing for a little while, it starts hurting.

“It was getting pretty painful out there lifting that neck up and the (left) shoulder. I had an emotional moment out there because I feel like anytime you are dealing with anything that’s nagging, it becomes a mental thing just as much as physical. That was probably my biggest challenge that I had to work through today.”

Collins, the 2022 Australian Open finalist, will next face the winner of Saturday night’s match between eighth-seeded Ons Jabeur of Tunisia and Estonia’s Kaia Kanepi.

Japan’s Naomi Osaka moved on without even taking the court, winning in a walkover when Karolina Muchova of the Czech Republic withdrew due to a left abdominal injury. Muchova just returned to action this week after sustaining a similar injury during last summer’s U.S. Open.

Osaka will face the winner of Saturday night’s All-American clash between Alison Riske and Ann Li.

Lucky loser Lucia Bronzetti of Italy also advanced without playing as Russia’s Anna Kalinskaya withdrew with a left arm injury. Bronzetti will next face Australia’s Daria Saville, who led 6-0, 1-0 when Katerina Siniakova of the Czech Republic retired with an abdominal injury.

Belinda Bencic of Switzerland got to a play a whole match and the No. 22 seed posted a 6-4, 6-1 win over Heather Watson of Great Britain. Bencic had five aces and saved seven of eight break points.

“She’s a very tricky player,” Bencic said afterward. “She plays with very much control and she tries to bring you out of position, so it was tricky at the start, but I’m happy I found my flow.”