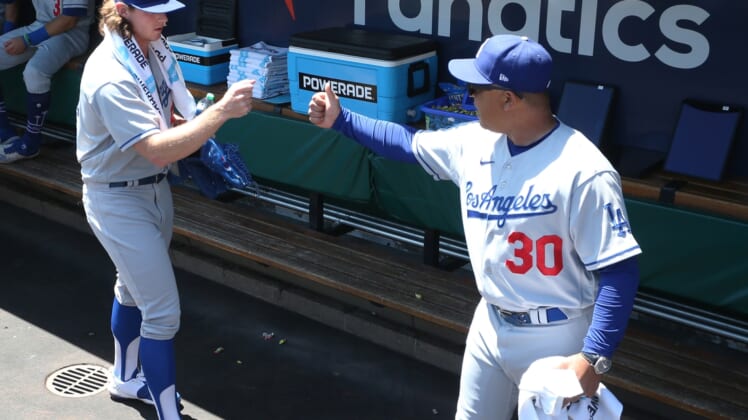 Daniel Vogelbach’s tiebreaking solo homer in the seventh inning Wednesday helped the Pittsburgh Pirates to a 5-3 win over the visiting Los Angeles Dodgers and a series win.

Josh VanMeter added two-run homer and tripled and scored, and Jack Suwinski hit a solo homer for the Pirates.

Pittsburgh starter Dillon Peters, making his 10th appearance and third start, was essentially used as an opener. He cruised through three scoreless innings, giving up two hits and striking out two with no walks.

Wil Crowe (2-2) pitched two-thirds of an inning with no runs and no hits in the seventh.

David Bednar struck out three during a six-out save, his fifth.

Edwin Rios hit a three-run double for the Dodgers.

Los Angeles starter Ryan Pepiot, making his major league debut, struggled some with command, walking five and hitting one batter in three innings. Still, he got through the scoreless outing with one hit and three strikeouts.

Daniel Hudson (1-2) gave up one run and three hits in the seventh.

Through 5 1/2 scoreless innings, the teams combined for six hits, two by Pittsburgh, against five pitchers.

Los Angeles reliever Tommy Kahnle entered in the bottom of the sixth, and things changed.

That marked the first time this year the Dodgers have yielded multiple homers in one inning.

Los Angeles responded in the seventh. Against reliever Chris Stratton, Justin Turner walked and went to third when Cody Bellinger reached on an error as VanMeter at second got handcuffed by a grounder. Chris Taylor walked to load the bases. Rios drove in all three with a double to right-center to tie it 3-3.

With one out in the bottom of the seventh, Vogelbach sent his fifth homer to right off Daniel Hudson to put Pittsburgh back on top 4-3.

VanMeter tripled and scored on Ben Gamel’s grounder in the eighth to make it 5-3.