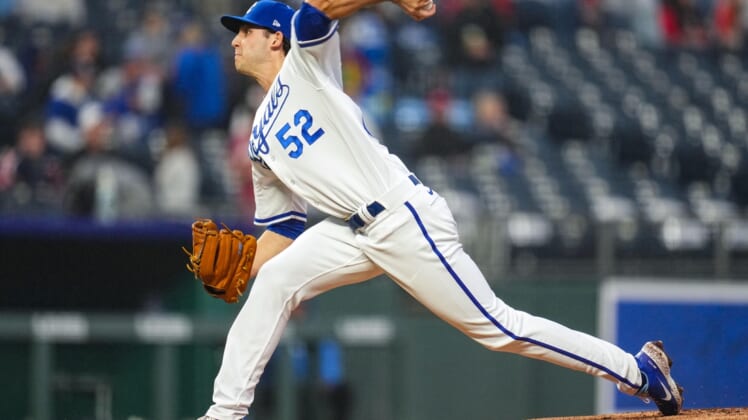 Daniel Lynch and four relievers shut down the Minnesota Twins as the host Kansas City Royals earned a 2-0 victory on Wednesday.

The Royals’ bullpen extended its scoreless innings streak to 17 2/3 innings.

Kansas City scored the game’s only runs on a double-play groundout and a bunt single to clinch its first series win of the season, having taken the first two of a three-game set. It was the Royals’ first shutout of the Twins in 95 meetings since Aug. 20, 2016.

The Twins, who came into the night next to last in batting average in the American League, managed just five hits, all singles.

Lynch (1-1) allowed just four hits and a walk in five-plus innings. He struck out two and never allowed a runner to reach third base.

Scott Barlow pitched the ninth inning to pick up his first save.

Twins starter Chris Paddack (0-2) gave up solo runs in the first and fifth innings to pick up the loss during his five-inning stint. He yielded five hits and no walks while fanning four.

The next run Minnesota scores in a Paddack start this year will be the first. The Twins were shutout by Clayton Kershaw and the Los Angeles Dodgers in Paddack’s previous outing.

Kansas City’s Whit Merrifield led off the first with a double, but he was robbed of a home run by left fielder Trevor Larnach, who reached over the fence to deflect the ball back onto the field. Merrifield went to third on an infield hit by Nicky Lopez and scored when Bobby Witt Jr. grounded into a double play.

The Royals added another run in the fifth on an RBI bunt single by Adalberto Mondesi. Andrew Benintendi and Hunter Dozier opened the inning with singles, with Benintendi going to third on Dozier’s hit. Mondesi bunted the ball between Paddack and first baseman Miguel Sano. Paddack then retired the next three batters to escape further trouble.