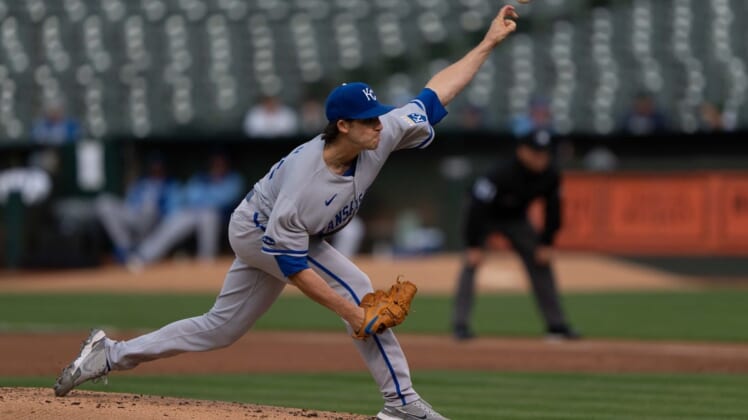 Salvador Perez doubled, homered and drove in two runs and Daniel Lynch struck out a career-high 10 in five effective innings Friday night as the Kansas City Royals opened a three-game road series with a 5-1 victory over the Oakland Athletics.

Whit Merrifield had three hits while Andrew Benintendi and Michael A. Taylor chipped in with two apiece for the Royals, who won their second in a row to improve to 2-2 on a nine-game California swing.

Elvis Andrus had two singles and scored Oakland’s only run as the A’s lost for the 14th time in their past 16 games.

The Royals jumped on A’s ace Frankie Montas (3-7) for single runs in the first, second and third innings, then took advantage of shaky Oakland defense to add two more in the fifth.

Perez’s homer came leading off the third to give Kansas City a 3-1 lead. It was his 10th of the season and the 210th of his career, second most in Royals history behind George Brett’s 317.

In the first, Perez doubled home Merrifield, who had singled. Benintendi’s single plated Nicky Lopez, who also had singled, in the second.

Down 2-0, the A’s had a chance to catch the Royals in the last of the second after Andrus and Jonah Bride singled with two outs.

Seeking his first win since April 26, Lynch (3-6) then walked Cristian Pache to load the bases before uncorking a wild pitch that allowed Andrus to score.

Bride and Pache didn’t advance on the short wild pitch, however, and Bride then had to hold at third on Chad Pinder’s single to right field, again loading the bases.

Lynch then got Ramon Laureano to ground out, retaining a 2-1 lead.

Lynch proceeded to retire nine of the next 10 batters he faced, striking out seven of them. He was pulled after having thrown 99 pitches and having allowed just the one run and four hits and two walks.

The 10 strikeouts were three more than he had recorded in any previous game in his two-year career.

An error by A’s third baseman Matt Davidson and a potential inning-ending pop fly that was allowed to drop between Davidson and shortstop Andrus contributed to the Royals’ final two runs in the fifth.

Montas left after five innings, charged with five runs (three earned) on 10 hits. He walked three and struck out four.