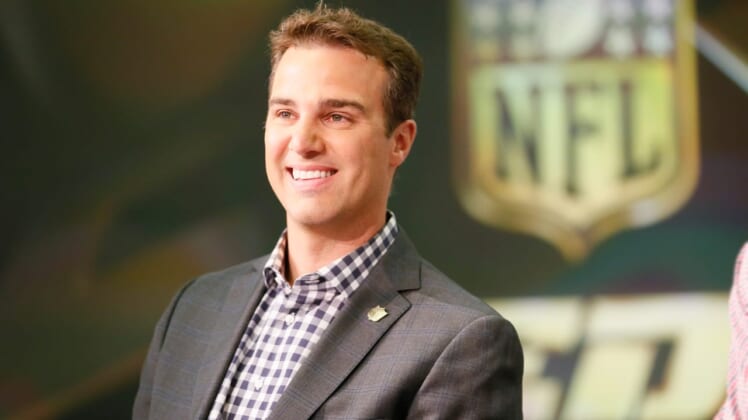 While the Las Vegas Raiders own picks No. 12 and 19 in the first round of the 2020 NFL Draft, and need a vertical threat at wide receiver, NFL Network analyst Daniel Jeremiah says they could choose a cornerback first.

For months, talk of the Las Vegas Raiders using their No. 12 overall pick in the upcoming NFL Draft on a speedy wide receiver have been taken almost a given. Yet, as we’ve learned so many times before, the draft doesn’t always go according to plan and NFL Network analyst Daniel Jeremiah says that could mean the Raiders fill another need first.

During a teleconference with national media, Silver and Black Today asked Daniel Jeremiah about the Raiders possibilities at both wideout and cornerback in the first round. Confirming other reports that teams are looking to move up in the first round either for receivers or other positions, Jeremiah said if two of the three top receivers are gone, the Raiders may opt to fill their other big need first.

Although Jeremiah rates Oklahoma’s CeeDee Lamb as his top receiver in the draft, he said either Lamb, Jerry Jeudy, or Henry Ruggs III would both become the best wideout on the field for Las Vegas. But, the analyst also said there’s no guaranteed all three – or even two of them – may be available when the Raiders select at No. 12.

“Let’s see what happens in front of them though, because as it stands, we look at that wide receiver run, you know, potentially could start with the Jets,” Jeremiah said. “You’d say okay well, the Raiders probably are going to get their first or second choice of receivers if that’s what they elect to do. But I think when it’s all said and done, I would not be shocked at all the Jacksonville trade out of nine. I know that there’s been some conversations from other teams that I’ve talked to that say they think that’s a possibility.”

They could end up going with the corner first and coming back with the receiver at 19. – Daniel Jeremiah, NFL Network

With reports circulating that Denver and others may look to move up for one of those Top 3 receivers, that could mean the Raiders choice at WR becomes more limited. Daniel Jeremiah said if Jacksonville traded out of No. 9, and a receiver is selected, and then the Jets options at tackle are limited, they could take the second wideout at No. 11.

“So they (Raiders) might end up getting her third choice at that point time and then they would have to judge if they rather have the third receiver for them, which, you know, let’s say it’s Ruggs, or would you rather take a corner and TJ Henderson who’s to me clearly the second (best) corner,” Jeremiah said. “That would be a decision to make – you take CJ Henderson first, to shore up the corner position, and know that at 19 you’re still probably going to be looking at one of those top five receivers.”

Consensus receivers closing out the Top 5 behind Jeudy, Lamb, and Ruggs III are LSU’s Justin Jefferson, and Denzel Mims from Baylor. Arizona State’s Brandon Aiyuk is also right there but expected to slide due to an injury.

“That scenario wouldn’t shock me at all if we have the positions right but if they flipped it,” Jeremiah said. “They could end up going with the corner first and coming back with the receiver at 19.”

The NFL Draft kicks off Thursday at 5pm PT across ESPN, NFL Network and ABC.