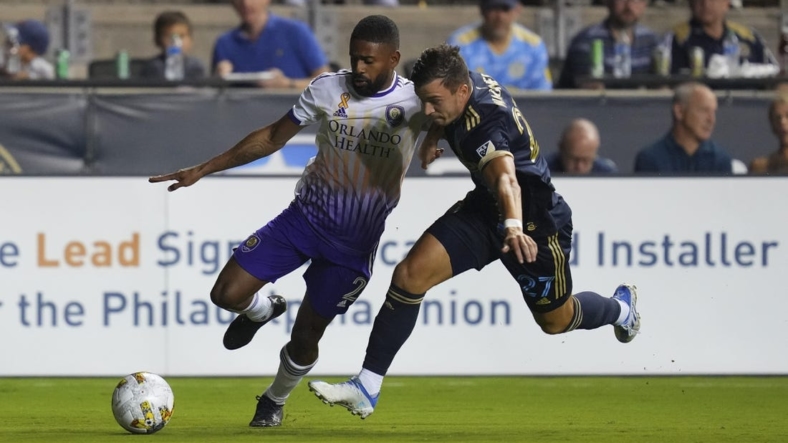 Daniel Gazdag scored from the penalty spot for his team-leading 19th goal and added two assists to lead the first-place Philadelphia Union to a comfortable 5-1 victory over visiting Orlando City on Saturday night.

Mikael Uhre added his 12th goal and Olivier Mbaizo, Alejandro Bedoya and Jack Elliott also scored for Philadelphia, which moved 10 points in front of second-place CF Montreal in the race for the top seed in the Eastern Conference.

The Union (18-4-9, 63 points) have won 11 of their last 13 and had pulled even with LAFC in the Supporters’ Shield race for the best regular-season record entering the weekend, with LAFC holding a game in hand. They can clinch the top East spot with one more win or one more Montreal defeat.

Philadelphia has outscored its opponents 46-9 over those 13 games. Its four wins by six goals over that span are the more than the total six-goal wins of any other MLS team in their entire club histories.

Andres Perea scored a late consolation goal for Orlando (12-11-6, 42 points), which was playing again only 72 hours after winning the U.S. Open Cup Final over second-tier Sacramento Republic FC at home.

Orlando manager Oscar Pareja rotated a considerable portion of his starting lineup as the Lions remained fifth in the Eastern Conference race.

The visitors were fairly solid until a bit of bad luck found them trailing 1-0 in the 39th minute.

Julian Carranza and Gazdag connected to find Mbaizo out on the right. Mbaizo took what looked to be a hopeful shot from the right fringe of the penalty area. But it caromed off an Orlando defender and looped over goalkeeper Mason Stajduhar before bouncing across the line.

Like so many Philadelphia games before, that sparked a Union onslaught.

Uhre made it 2-0 four minutes later when he ran onto Gazdag’s throughball and hammered a low finish that deflected off Stajduhar on its way in.

Gazdag made it 3-0 early in the second half from the spot after a foul by the Orlando goalkeeper trying to collect a loose ball.

And Bedoya headed in Kai Wagner’s cross to make it 4-0 after 63 minutes, a moment soured only by an apparent groin injury for the goal scorer and Union captain that forced him out of the game after the goal.