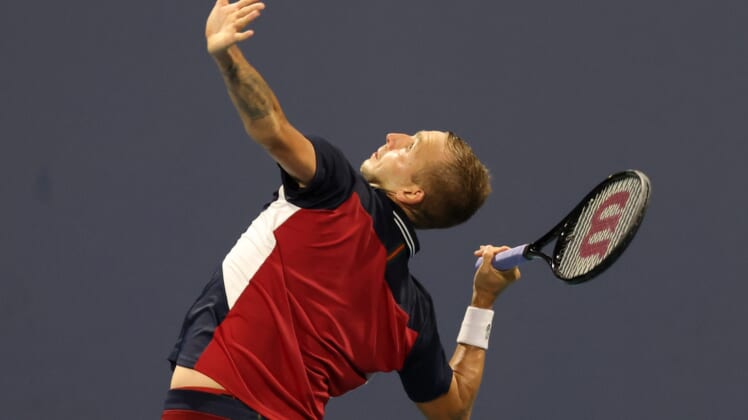 World No. 1 Novak Djokovic lost his first match of 2021 on Thursday, falling in straight sets to Daniel Evans at the Monte Carlo Masters in Monaco.

Evans, of Great Britain, secured his spot in the tournament quarterfinals with a 6-4, 7-5 win over the 18-time Grand Slam champion. Djokovic, who won the Australian Open earlier this year, won in Monaco in 2013 and 2015.

It will be the first ATP Masters 1000 quarterfinal for Evans, who rallied from 0-3 down in the second set on his way to victory.

“It hasn’t sunk in yet,” Evans said following the two-hour, nine-minute match. “I couldn’t quite believe the last ball went over the net. It nearly didn’t. I was pleased, regardless, with how I was playing coming into the match. I felt good.”

It was the fourth career win in 18 matches for the world No. 33 Evans against a top 10 player.

“The biggest thing is, you have got to believe you can win,” Evans said. “I can walk on saying it, but you have really got to believe it. Of course, I doubted myself in the match. Serving it out is not easy. You have got all sorts [of things] running through your head. I am just happy with how it went and it will be one to savor for maybe after the tournament, to tell the kids and grandkids that you beat the World No. 1. It is a nice one.”

It’s a story Djokovic likely won’t tell. He praised Evans after the match, however.

“He deserved to win. He was a better player,” the Serbian said. “Just more focused I guess and played with a better quality in the decisive moments. This has been probably one of the worst matches and performances from my side I can recall in the [recent] years. … He’s very unpredictable with his shots. He dismantled my game.”

Also moving on to the quarterfinals were No. 4 seed Stefanos Tsitsipas, a 6-3, 6-4 winner over Cristian Garin of Chile, and Spaniard Alejandro Davidovich Fokina, who beat Lucas Pouille of France 6-2, 7-6 (2).