UFC boss Dana White has no sympathy for middleweight contender Paulo Costa, who pulled out of his scheduled August fight because he said he wouldn’t be paid enough.

Costa, ranked No. 2, said he won’t fight No. 4 Jared Cannonier at the contracted rate, given what YouTube sensation Logan Paul earned in an exhibition against retired boxer Floyd Mayweather last weekend. While the payouts aren’t yet known, Paul could make as much as $20 million, with Mayweather’s bank account adding at least $50 million, TMZ reported.

So White is moving on from Costa (13-1), who lost his most recent fight by technical knockout in the second round to Israel Adesanya (20-1) last September at UFC 253. Kelvin Gastelum will replace Costa against Cannonier.

“He’s under contract,” White told TSN. “I’m supposed to let people out of their contract just because they’re mad that YouTube kid is fighting and making money? You should be happy for the kid, good for him. He put himself in a position to where he was able to fight Floyd Mayweather and make a bunch of money. You’re mad? You just came off a ridiculous, horrible performance. Come back and put yourself in a position to do something big.”

It’s not known how much Costa was to be paid for the upcoming fight, but he teased a number on Twitter and contended he never signed a deal for the fight. 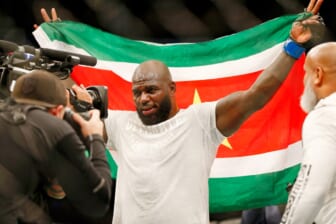 In another tweet: “UFC needs to pay me as main fighter to have fighting in main events. Youtubers are showing all disgrace on this business. Just to be clear. I never signed or locked up that contract. Why ufc announced this fight if didn’t signed? My question too.”

Costa is under contract, however, to UFC for an unknown number of future fights. If he wants to leave the circuit, then the 30-year-old Brazilian should get back to fighting and fulfill his commitment, White told TSN.