Washington Commanders owner Dan Snyder will testify voluntarily in front of Congress on Thursday after being sought by the House Oversight committee for weeks.

The US House Oversight & Reform Committee requested on June 1 for Snyder and NFL commissioner Roger Goodell to testify regarding the league’s investigation into the Commanders’ toxic culture.

While Goodell provided his virtual testimony in June, Snyder didn’t make himself available. After facing a subpoena from Chairwoman Carolyn Maloney (D-N.Y.), Snyder and his representatives offered alternatives that wouldn’t require him to testify under oath.

A spokesperson for the House Oversight Committee announced Thursday that Washington’s franchise owner will appear virtually for a deposition at 8 a.m. ET. Notably, the deposition will not be streamed live to the public, which was done when Goodell testified.

While Snyder’s testimony won’t be available to watch live, the committee can make either portions or all of the transcript available for the public shortly after.

While Maloney issued a subpoena for Snyder to appear, per ESPN, it was never served by U.S. marshalls. However, it can’t be served when Snyder is outside of the country. 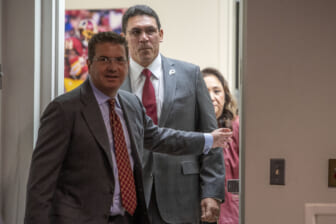 Why the House Oversight Committee is investigating Dan Snyder

The committee launched an investigation into allegations of the Commanders’ toxic culture for years under Snyder’s regime as owner. It also came in response to the NFL’s investigation into one of its most prominent owners, resulting in a historic $10 million fine but never releasing the findings.

When the committee opened its inquiry into Snyder in October 2021, members brought in former Commanders’ employees to testify regarding their experiences inside the organization. Many came forward, including a former team executive providing documentation alleging financial misconduct by the franchise.

Because Snyder is testifying voluntarily and he isn’t under a subpoena received, he is not mandated to answer the questions asked of him by Congress. With multiple non-diclosure agreements in place with many of the women who accused Snyder and former Commanders’ staffers of sexual harassment, he could decline to answer because of the NDAs.