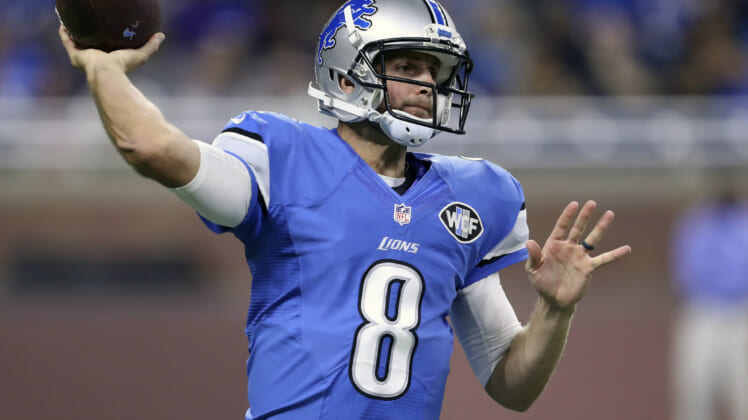 As other quarterbacks like Tom Brady and Drew Brees contemplate their post-playing career plans, there’s a different retired NFL QB who’s joining the fray. The latest to get involved in the media musical chairs is former Detroit Lions quarterback Dan Orlovsky.

We already knew ESPN plans to roll out Joe Buck and Troy Aikman as their leading broadcast team during Monday Night Football, but with the popular television company getting two MNF games in some weeks, there’s a need for a second team.

This year, we’ll have Dan Orlovsky joining the team of Steve Levy and Louis Riddick Jr. during Monday night broadcasts on ESPN according to Brad Marchand of The New York Post.

The Levy/Riddick/Orlovsky crew is expected to call a few games this upcoming football season and will reportedly ramp up to around five games per year starting in 2023.

Orlovsky also received interest from FOX Sports to do a daily NFL talk show, in addition to handling some broadcast duties on Sundays, but obviously ESPN’s offer won out in the end.

In the meantime, observers can still find Orlovsky in his typical duties on various ESPN production shows such as NFL Live, First Take, and Get Up, but now he’ll also get to be in the booth for NFL games in addition to several college football matchups as well.

ESPN had been in search of a third member to join their current crew after Brian Griese accepted a job to be the quarterbacks coach of the San Francisco 49ers. Now, a different former NFL vet QB will take his spot in the booth.

We’ll see how Orlovsky does in his new role, but it can’t go much worse than when he ran out the back of the endzone for a safety in 2008 with the Lions.

While this goof was a laughable moment 14 years ago, Orlovsky can laugh about it now, even placing “Endzones should be 11 yards” in his Twitter bio. At least he’s a good sport. Good luck to Orlovsky in his newest gig.

Related: The Rock announces all XFL games will broadcast on ABC, ESPN, Disney+, and FX in 2023