There’s perhaps no hotter story in basketball right now than the seemingly impending blowup of the Portland Trail Blazers. Rumors have circulated for years regarding a possible Damian Lillard trade, yet the Oakland native has always eventually shut them down. This time is no different.

Here are the Portland star’s latest comments regarding any possible trade away from the Blazers, as portrayed by Sports Illustrated.

“My intentions are to be in Portland and to figure it out,” Lillard said. “I also know that people are going to continue to have these same conversations because it’s fun to talk about but that s*** is not accurate.

Despite the Blazers’ recent struggles, be it their 11-14 record, the firing of their general manager, C.J. McCollum’s injury concerns or even his own downfalls (lowest PPG since 2014-15), Lillard is saying all the right things.

This comes after recent reports have leaked of potential GMs being hesitant to take a job with the Blazers without having the go-ahead to trade Lillard. Obviously a statement as strong as this from Lillard won’t help matters on that front, but it will help Lillard stay in good graces among fans in Portland.

At the same time, maybe Lillard is simply publicly making these comments, knowing he can’t really say anything else and still have his fans’ full support. Should the Blazers miss the playoffs, don’t be surprised if they revisit a possible Lillard trade this offseason, at which point, the star point guard may finally give in. 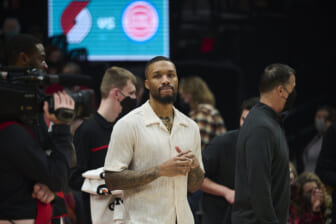