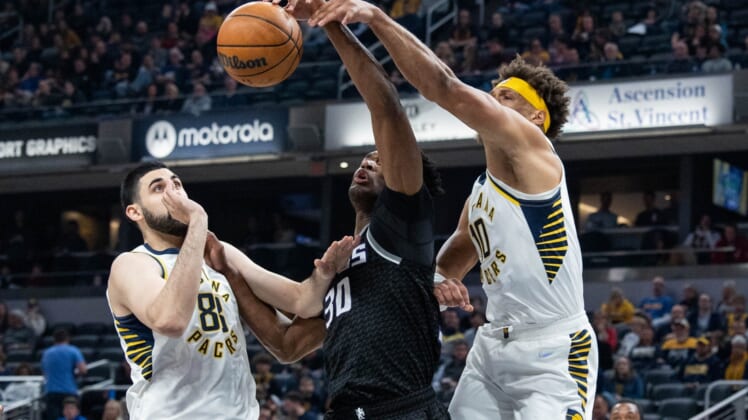 Damian Jones tipped in a Trey Lyles miss with two-tenths of a second remaining Wednesday night, allowing the Sacramento Kings to overtake the Indiana Pacers for a 110-109 victory in Indianapolis.

Jones’ heroics came after former Sacramento standout Buddy Hield, traded to Indiana last month, fumbled the ball out of bounds with 14 seconds left and the Pacers holding a one-point lead.

Lyles could do no better than to get off a 25-footer, but the ball ended up in friendly hands and Jones converted the game-winner.

However, Sabonis couldn’t play in his return to Indiana because of a bruised knee sustained in Sacramento’s previous game. Meanwhile, Haliburton contributed 13 points and 15 assists to his new team’s cause, while Hield, part of the same trade, used five 3-pointers to tie the Kings’ Davion Mitchell for game-high scoring honors with 25.

In a tightly contested matchup in which neither team led by more than 11, the Kings took their second-to-last lead at 106-105 on a 3-pointer by Mitchell with 2:27 remaining.

But Hield, the Kings’ all-time leader in 3-pointers with 1,248, responded 16 seconds later with a driving hoop that produced the eighth lead change of the final period.

After Terry Taylor upped the Indiana lead to three by sinking two free throws with 1:08 left, the Kings managed to get within 109-108 on a Mitchell jumper with 18.7 seconds to go. The visitors then avoided having to take a late foul when Hield mishandled the ball out of bounds.

Oshae Brissett contributed 10 points and a game-high 10 rebounds for the Pacers, who had won 94-91 at Sacramento on Nov. 7. Goga Bitadze added 20 points, Taylor 13, Duane Washington Jr. 11 and Lance Stephenson 10.