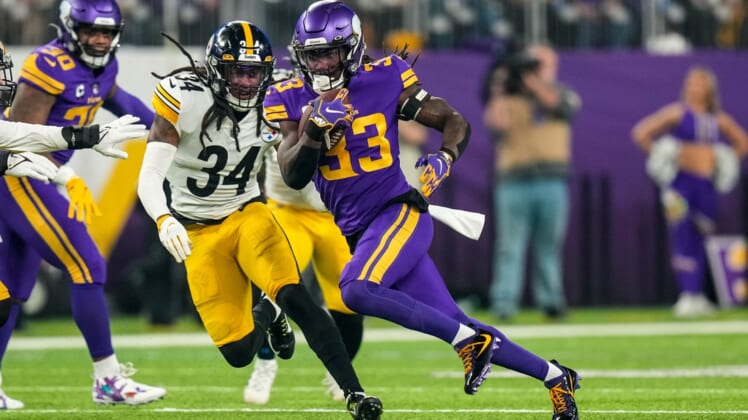 Dalvin Cook rushed for an NFL season-high 205 yards and two touchdowns Thursday night as the Minnesota Vikings built a 29-0 third-quarter lead and hung on for dear life to beat the Pittsburgh Steelers 36-28 in Minneapolis.

Cook, who missed Sunday’s 29-27 loss at 1-10-1 Detroit with a shoulder injury, carried the ball 27 times and helped Minnesota improve to 6-7. But the Vikings nearly blew a four-score lead in the final 17:11.

Pittsburgh (6-6-1) drew within a score when Ben Roethlisberger hit Pat Freiermuth with a 15-yard scoring strike with 4:14 left in the game, followed by a 2-point conversion. The Steelers then got to the Minnesota 12-yard line with three seconds remaining.

Roethlisberger found Freiermuth open in the middle of the end zone, but Harrison Smith and Xavier Woods combined to knock the ball loose for an incomplete pass, quashing Pittsburgh’s hopes of pulling off one of the biggest comebacks in league history. 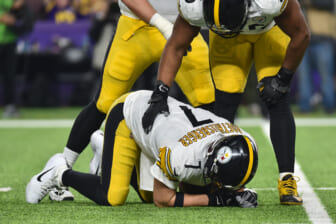 Roethlisberger completed 28 of 40 passes for 308 yards with three touchdowns and an interception. Vikings quarterback Kirk Cousins was 14 of 31 for 216 yards with two scores and two picks, finding K.J. Osborn for a 62-yard touchdown with 10:51 left in the game that made it 36-20.

The first half was all Minnesota, all the time. It outgained Pittsburgh 300-66, rushing for 176 yards. The Vikings averaged nearly 10 yards per carry.

But it was Cousins’ arm that put them up 6-0 with 3:31 left in the first quarter as he found Justin Jefferson on a crossing route for a 14-yard touchdown pass. Greg Joseph added a 38-yard field goal 17 seconds into the second quarter to make it 9-0.

Minnesota then carved up the Steelers’ defense for two long touchdown drives. Cook’s 29-yard run off right tackle with 9:55 left in the first half finished a 78-yard drive and his 7-yard run at the 2:20 mark polished off an 60-yard march for a 23-0 halftime lead.