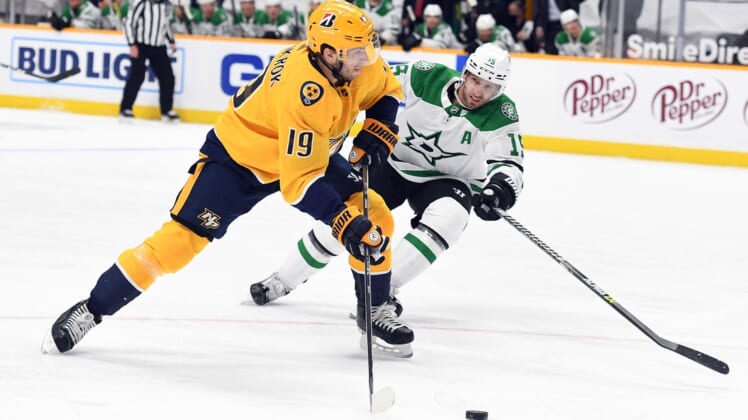 Esa Lindell, Jason Robertson, Jamie Benn and Miro Heiskanen all scored for the Dallas Stars en route to a 4-1 road victory over the Nashville Predators on Thursday.

Goaltender Anton Khudobin made 21 saves for the Stars, who went into the clash with just one win in six games and desperately needed a win to stay in the playoff hunt.

Colton Sissons scored the lone goal for the Predators, who received a 27-save performance from goalie Juuse Saros and saw their six-game winning streak snapped.

With their playoff hopes fading fast, the Stars showed top-shelf determination from the drop of the puck — by comparison, the Predators needed nearly eight minutes to register their first shot on goal — Dallas was quickly rewarded.

Joe Pavelski stole the puck in the neutral zone and fed a pass up ice to Blake Comeau. Lindell was fed a pass as he drove to the net, and he buried the chance at the 2:39 mark of the first period.

However, the Predators drew even late in the frame thanks to the Sissons’ tally. After he gained the puck in the corner and weaved to the slot, Sissons deposited a shot home with 3:39 remaining in the first period.

The Stars, who reached the Stanley Cup Final last season, stormed out of the gates in the second period too, and regained the lead when rookie standout Robertson scored in his third consecutive game.

After taking a long pass to create a rush, Roope Hintz drew a pair of defenders to him before sending a cross-ice pass that left Robertson with a yawning net to hit at 8:49 of the second period.

Dallas outshot the Predators 13-4 in the second period.

Jamie Benn’s lucky power-play goal early in the third period extended the Dallas lead. Denis Gurianov’s shot first banked off a defender’s skate and then Benn’s foot before finding the mark to make it a 3-1 game 101 seconds into the final frame.

Heiskanen iced the game with an empty netter with 2:09 left. Pavelski finished with a pair of assists.

The clash came at a price for Dallas, though, as defenseman Joel Hanley left the game after the first period due to a lower-body injury.