Doncic, 22, also had 11 rebounds and 13 assists to register a triple-double. He was named the MVP of the Olympic qualifying tournament, held in Kaunas, Lithuania.

Because Slovenia didn’t qualify for the 2019 FIBA World Cup, the country had to enter the last-chance tournament to earn a berth in the 2020 Tokyo Games, which begin later this month.

Doncic’s boss, Mavericks owner Mark Cuban, was among the first people to congratulate him and all of Slovenia on the “great win.”

Slovenia’s win had to be a stunner in Lithuania. The national team has been an international power since the country split from the Soviet Union and first competed as an independent nation in the Barcelona Games in 1992.

The nearly 30-year streak in the Olympics for Lithuania was the longest of any European nation. Lithuania joined the United States as the only men’s basketball teams to reach the quarterfinals of the Olympics since Barcelona.

Team Lithuania won the bronze medal in 1992, its first of three-place finishes in a row. 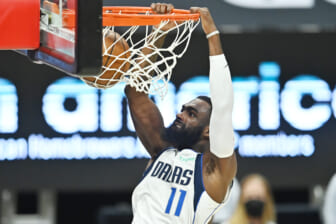 The Mavericks were eliminated by the Los Angeles Clippers in seven games in the first round of the NBA playoffs, and after that, Doncic turned his focus to an Olympic berth. On Saturday, he was asked if he’d rather win an NBA championship or a gold medal.

“I would say gold medal with Slovenia. You play for your country and that’s something,” Doncic said. “But I wouldn’t mind both.”

Slovenia is in Group C at the Olympics, joined by Argentina, Japan and Spain. Donic and his teammates will open on July 26 against Argentina, whose roster includes guards Luca Vildoza of the New York Knicks and Facundo Campazzo of the Denver Nuggets.