Dallas Mavericks fined $100,000 for ‘bench decorum’ in Game 2 against Warriors 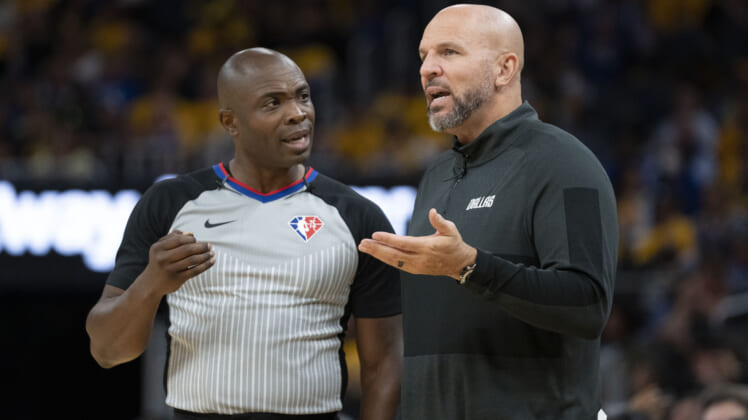 For the third time this postseason, the Dallas Mavericks’ organization faces a fine for how it has handled itself on the bench during a game.

Ahead of Dallas’ must-win Game 3 matchup against the Golden State Warriors in the Western Conference Finals on Sunday, it has been fined a whopping $100,000 for antics in Game 2’s loss to Golden State Friday evening.

“The Dallas Mavericks organization has been fined $100,000 for continuing to violate league rules regarding team bench decorum, it was announced today by Byron Spruell, President, League Operations. The amount of Dallas’ fine also reflects prior infractions of team bench decorum rules in the 2022 NBA playoffs.

On multiple occasions, several players and a member of the coaching staff stood for an extended period in the Mavericks’ team bench area, stood away from the team bench, and were on or encroaching upon the playing court during game action in Dallas’ 126-117 loss to the Golden State Warriors in Game 2 of the Western Conference Finals on May 20 at Chase Center.”

The NBA said in a statement, via the league’s official website

Dallas had already been fined twice in the playoffs. That included a $50,000 fine for their antics during a Game 7 win over the Phoenix Suns in the Western Conference Semifinals.

The NBA reserves the right to fine teams if their bench players and coaches get too close to the playing court. That happened multiple times, including an incident in the second half that led to a double technical on the part of Damion Lee and Davis Bertans.

Typically, the NBA doesn’t enforce these types of rules. But with opposing teams having complained about it in the first two rounds, Dallas is under a microscrope.

As for the fine itself, this is still small potatoes. Dallas Mavericks owner Mark Cuban is worth a cool $4.7 billion. He’ll be able to find the $100,000 under a sofa cushion.

Dallas heads into Sunday’s home outing against the Warriors in need of a win. A look in Game 3 would send the team into a 3-0 series hole — pretty much ending its season in the process.