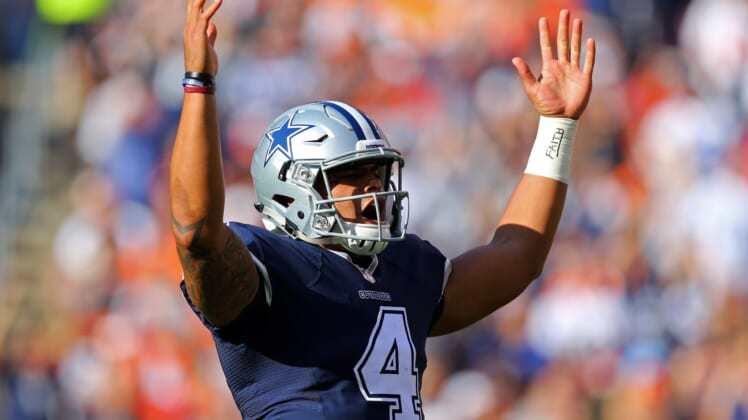 Following his team’s 35-10 blowout win over the Cleveland Browns on Sunday, Dallas Cowboys rookie quarterback Dak Prescott continues to receive praise from around the NFL.

And for good reason.

Sunday’s game is yet another example of the rookie mid-round pick absolutely dominating the landscape of the league at just the halfway point of his initial season. Prescott completed 21-of-27 passes for 247 yards with three touchdowns and zero interceptions against Cleveland. This means that Prescott has now compiled 16 touchdowns and just two interceptions in his first eight starts.

Needless to say, the Cowboys as a team have taken full advantage. They have won seven in a row and are tied with the New England Patriots for the best record in the NFL at 7-1.

For his part, Prescott is the first rookie quarterback in NFL history to have won seven of his team’s first eight games.

He’s also tallied a 100-plus quarterback rating in six of those eight starts. Yes folks, that’s a NFL record as well.

Dak Prescott is the 1st rookie in NFL history to have 6 starts with a 100+ passer rating in his team's 1st 8 games of a season pic.twitter.com/FgQI7T4naU

Add in the fact that Prescott broke the record for most consecutive passes to start a career without an interception, and it’s readily apparent that he’s the story around the NFL as a rookie.

We’re definitely going to want to keep up on what Dak does in the second half of the season. If he repeats what we’ve seen through the first two months, it’s going to be an historical rookie season.