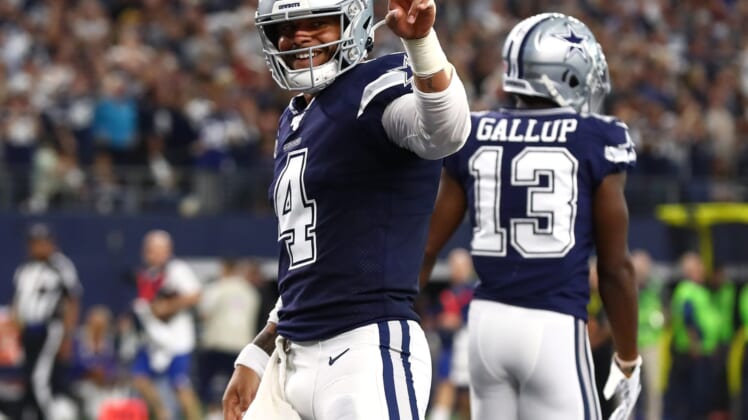 Five months after a gruesome ankle injury, Dallas Cowboys quarterback Dak Prescott got the long-term contract he was seeking all along, agreeing Monday to a four-year, $160 million deal with the team for a record $126 million guaranteed, multiple outlets reported.

The deal will average $42 million over each of the first three years and includes a no-trade clause, according to ESPN. Incentives could push the deal to as much as $164 million.

Prescott, 27, was in search of a long-term deal the past three years to no avail. Dallas most recently applied the franchise tag on him last March 16, in a deal that was worth $31.4 million for the 2020 season.

In a Week 5 game against the New York Giants, though, Prescott came away with a compound fracture and dislocated right ankle after a tackle by Giants safety Logan Ryan. He underwent surgery later that day and was done for the season.

Satisfied with the progress he has been making in rehab, the Cowboys not only locked in Prescott to be their quarterback for multiple years moving forward, they also gave him an NFL record $66 million signing bonus.

The deal technically is for six years, but voided to four as a way to help the Cowboys work within salary-cap restraints, ESPN reported.

Prescott’s multi-year deal finally came after other quarterbacks in his draft class received one like Jared Goff with the Los Angeles Rams and Carson Wentz with the Philadelphia Eagles. Both of those clubs already have moved on from those signal callers, though.

Prescott, a former fourth-round draft pick out of Mississippi State in 2016, has passed for 17,634 yards with 106 touchdowns and 40 interceptions over five seasons with the Cowboys and 69 games (all starts).

Prescott’s best season came in 2019 when he passed for 4,902 yards and 30 TDs, both career bests, but Dallas went just 8-8 that season and did not advance to the playoffs.

With Prescott out of action this past season, Dallas went 6-10 and missed the playoffs for the second consecutive season.