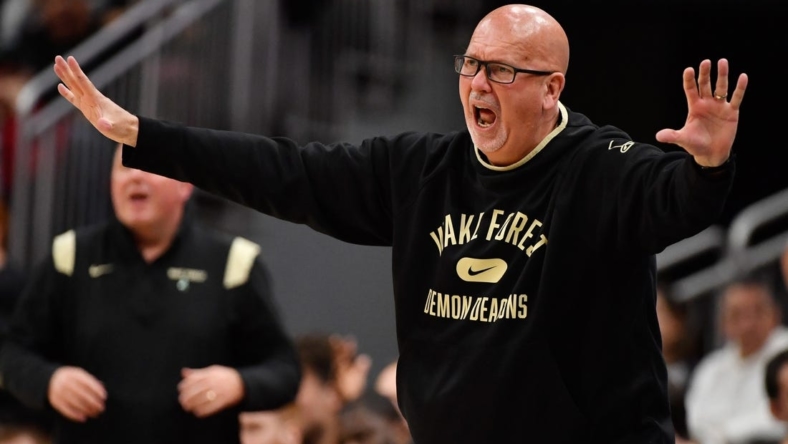 Tyree Appleby added 22 points and Davion Bradford had 11 points for the Demon Deacons (2-0), who shot 50.9 percent from the field.

Williamson made three of Wake Forest’s nine 3-pointers. The Bulldogs were 8-for-27 on 3-point attempts.

Wake Forest’s lead dipped from 23 points to 51-40 before Cameron Hildreth’s 3-pointer and Williamson’s drive for a basket reversed the momentum.

When Andrew Carr hit a 3 followed by back-to-back baskets from Bradford, Wake Forest’s lead was 67-46.

Georgia climbed back again, pulling within 71-62 on Hill’s three-point play with 2:07 to play. Each team committed a turnover before Appleby’s two free throws. Then Roberts hit a 3-pointer for Georgia before two more foul shots for Appleby.

For most of the game, the Demon Deacons led by double digits.

A 12-2 run midway through the first half allowed the Demon Deacons to gain control at 31-16. A 7-0 spurt that began with Carr’s 3-pointer later in the half helped boost Wake Forest to a 41-22 halftime lead.

Both teams had trouble at the free-throw line, with Wake Forest struggling before until the last 93 seconds and finishing 18 of 26. Georgia was 11 of 19.

Wake Forest ended up with 16 turnovers. Hildreth had a game-high 11 rebounds off the bench.

After Wake Forest was left out of the 2022 NCAA Tournament largely based on the lack of a quality non-conference schedule, this was a sign of an upgrade by playing a Power 5 team.