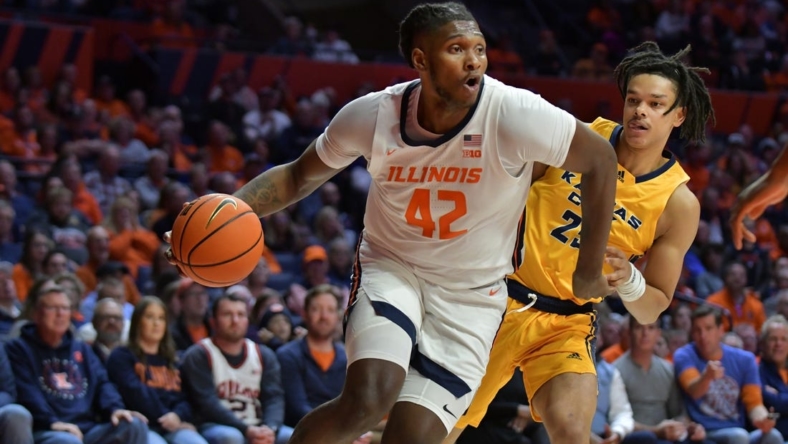 No. 23 Illinois’ strong start largely can be tied to the presence of Dain Dainja.

The Illini improved to 2-0 following his second straight double-double. After recording 17 points and 10 rebounds against Eastern Illinois in the season opener, Dainja delivered 20 points, 15 rebounds and five blocked shots in 23 minutes of an 86-48 victory over Kansas City on Friday.

Dainja will look to continue stuffing the stat sheet when the Illini host Monmouth on Monday in Champaign, Ill.

“He’s kind of the dancing bear. He’s got great, great feet,” Illinois coach Brad Underwood said. “He’s light on his feet. He’s got great, great length. He’s 265 pounds. When he hits you, you know it, and the thing I’ve been impressed with is just his tenacity on the glass. That’s been very, very consistent.”

Dainja has provided a major lift for the Illini while coming off the bench.

“I try to just bring energy to the team. I want to win,” Dainja said. “That’s the biggest thing for this program. I think it’s just winning. When I step out on the floor, I try to do everything for the team I can to win.”

After a slow start offensively, the defense tightened and forced 24 Kansas City turnovers. Illinois scored 28 points off the turnovers and cruised to the victory.

“I would just say bringing the energy on defense. That’s what got me going,” said Jayden Epps, who scored 13 points. “Bringing good defense and just rallying my teammates together to get going. Obviously, our defense led to offense. I was just playing defense, playing hard, and it just got us all going in the late first half and second half.”

Monmouth will look to rebound after a tough 0-2 start.

“Virginia is really, really good. Tony Bennett helped me years ago with our defense and he’s always been so, so good to me,” Monmouth head coach King Rice said. “Their team is a team and they’re not going to do things that aren’t team-like. If you try to shortcut it, it could get ugly, and tonight I thought we were good for 10 or 11 minutes.

“Unfortunately, we had to sub and our subs are young and they turned up the heat,” Rice added.

Monmouth enters this matchup with a 1-18 all-time record against ranked opponents. The lone victory came on Thanksgiving Day in 2015 against No. 17 Notre Dame in Orlando, Fla.

Monmouth, which is competing in its first season in the Colonial Athletic Association, was picked to finish 10th in the conference’s preseason poll.