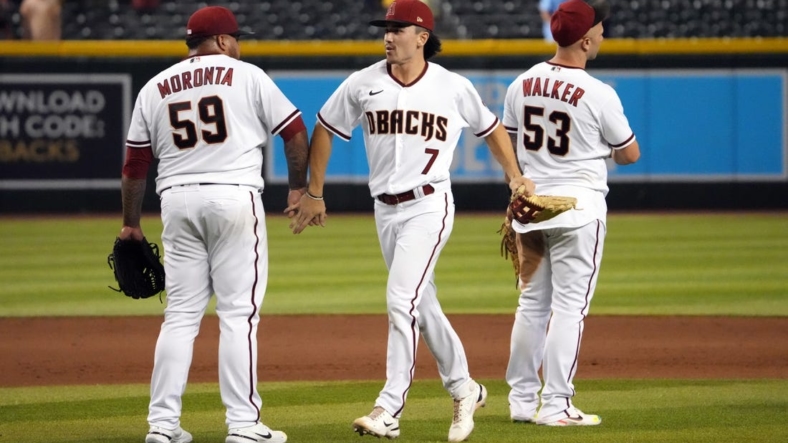 Zac Gallen will look to continue his torrid pitching when the Arizona Diamondbacks face the Philadelphia Phillies on Tuesday night in Phoenix.

Gallen is looking for his fifth straight scoreless effort. The right-hander hasn’t allowed a run since Aug. 2 and has given up just 12 hits over 27 1/3 innings during the stretch of zeros.

Another scoreless start would get Gallen in range of the top stretch in Diamondbacks history, the 42-inning scoreless streak by Brandon Webb in 2007.

But in Tuesday’s start, Gallen will try to ignore the streak. He said it was on his mind too often when he blanked the Kansas City Royals on three hits over six innings during a no-decision on Wednesday.

“It’s one of those things where if you let it get too big and control you too much, it can be a problem,” Gallen told reporters.

Over his last seven starts, Gallen is 4-0 with a microscopic 0.82 ERA. He hasn’t been defeated in his last 13 outings — his last loss coming when the Phillies got to him for six runs (four earned) and seven hits over 1 2/3 innings on June 10.

Arizona rallied from a seven-run deficit to record a 13-7 victory Monday as it scored six runs in consecutive innings for the first time in franchise history.

The Diamondbacks have won six straight home games against the Phillies, who have lost their past two overall games after winning 22 of their previous 30. Arizona has won four straight overall.

Corbin Carroll, who was recalled from Triple-A Reno on Monday, was one of the heroes for Arizona on Monday. He lined a tiebreaking two-run double in the fifth inning for his first major league hit.

It was the second time this season the Diamondbacks racked up 13 runs against Philadelphia.

The Phillies surely are smarting after blowing their big lead. It marks the second time this season Philadelphia led 7-0 in the fourth inning and lost. The Phillies fell 8-7 to the New York Mets on May 5 after blowing a similar lead.

An error by Jean Segura led to four unearned runs in Arizona’s first six-run inning in the fourth.

“This is one that you just have to take and throw it away,” Segura said. “We’ve just got to continue the way we’ve been playing the last three months.”

National League home run leader Kyle Schwarber hit a three-run homer and knocked in four runs on Monday. He has 36 homers this season.

“We’ll just have to play it day by day,” Phillies interim manager Rob Thomson said. “We’ll see how he reacts to staying off it for a day.”

Nola, 29, is coming off his third career shutout and fifth complete game of his career. He struck out a season-high 11 without a walk and gave up five hits in the win over the Cincinnati Reds last Thursday.

Nola has allowed one earned run or less in five of his last five seven starts. He is 4-3 with a 2.42 ERA during the span.

Nola is 1-1 with a 6.06 ERA in three career starts against Arizona.