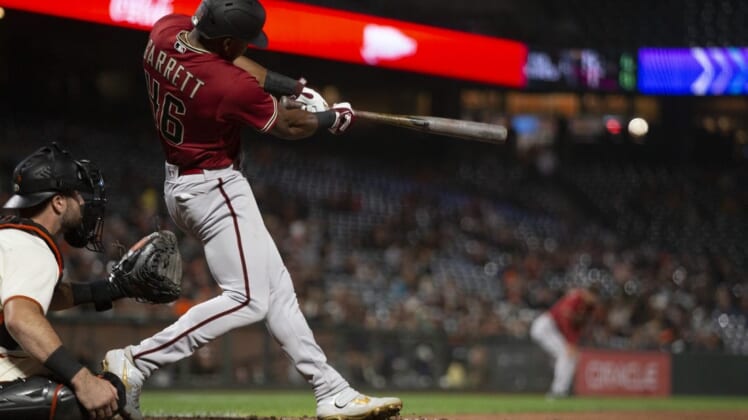 Newcomer Stone Garrett and red-hot Christian Walker will get an opportunity to help the visiting Arizona Diamondbacks gain a four-game split with the San Francisco Giants when the National League West rivals conclude their series on Thursday afternoon.

As the Giants had done en route to a one-run win the night before, the Diamondbacks overcame a late deficit Wednesday to earn a 3-2 win and deny the hosts what would have been a third straight win in the series.

Garrett, making his major league debut, and Walker played a hand in two comebacks on Wednesday.

Walker singled and scored on Garrett’s first big-league hit, a double, to erase a 1-0 Giants lead in the fourth. Walker was batting for just the second time after being promoted from Triple-A Reno earlier in the day.

The duo combined for a nearly identical feat in the eighth, again with Arizona having fallen behind by a run. But this time, Walker, who again had singled, stopped at third base on Garrett’s second double, and both scored on pinch-hitter Jake McCarthy’s two-out single.

Garrett, who was leading the Pacific Coast League in home runs, RBIs and extra-base hits at the time of his promotion, became the second major-leaguer this season to record two doubles in his big-league debut. Juan Yepez of the St. Louis Cardinals did it in May against the Kansas City Royals.

The feat had never been accomplished by a Diamondback.

Garrett, 26, spent part of his night Wednesday explaining why it took him 7 1/2 professional seasons to make it to the big leagues.

“When it came down to it, I’m not the best spring training player,” he said. “It takes me a little while to get going.”

The task of slowing Garrett while also dealing with Walker, who has eight hits in his past four games, is expected to fall to Giants right-hander Logan Webb (11-5, 3.00 ERA) on Thursday.

Webb has won his past two starts, allowing a total of two runs and nine hits in 15 innings. He threw eight shutout innings in his most recent outing against the Pittsburgh Pirates on Saturday.

Webb has split a pair of decisions against the Diamondbacks this year. The 25-year-old has made five starts against Arizona in his career, going 3-1 with a 2.15 ERA. Walker is 3-for-8 with two doubles in their head-to-heads.

The Diamondbacks are slated to counter with righty Zac Gallen (8-2, 2.94), who will face the Giants for the third time this season. He didn’t get a decision in either of the first two outings while limiting San Francisco to four runs (three earned) and seven hits in 11 2/3 innings.

Gallen will see J.D. Davis for the first time in his career. The Giants’ trade-deadline acquisition has four homers in 12 games since moving west from the New York Mets, for whom he had just four homers in 66 games.

“He’s got tremendous power,” Giants manager Gabe Kapler said. “Maybe it’s finding his rhythm and groove. He’s been swinging the bat really well. I think it might be a comfort thing.”