D-backs look to ‘trust’ skills with Dodgers up next 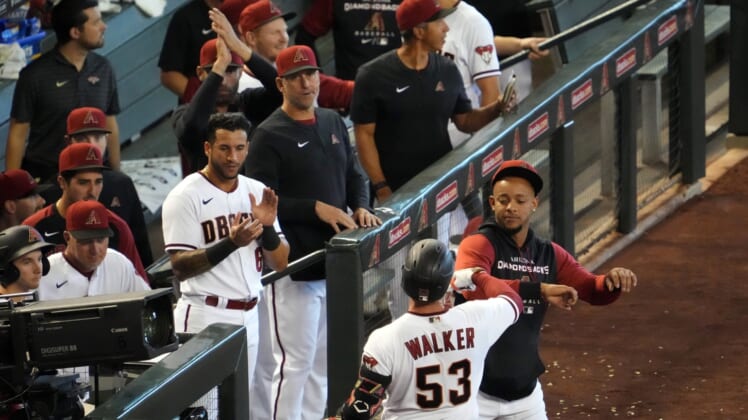 Six games in the previous 10 days against the New York Mets showed the Arizona Diamondbacks what they can do.

It also showed the Diamondbacks what they can’t do in order to beat potential pennant contenders such as the Mets and Los Angeles Dodgers.

The Diamondbacks will continue a six-game homestand Monday night when they host the Dodgers in the first clash this season between the National League West teams.

Both teams played rubber games of three-game sets Sunday, when the Diamondbacks fell to the Mets 6-2 and the Dodgers cruised to a 10-2 victory over the San Diego Padres.

The Diamondbacks are 2-4 this season against the Mets, whom they also played in New York from April 15-17. Arizona earned victories in the middle games of each series.

On Friday night, the Diamondbacks made up a four-run deficit in the final three innings but fell 6-5 in 10 innings when Starling Marte legged out a two-out RBI infield single.

On Sunday, Arizona committed three errors — increasing its season total to 18, the most in the National League and tied with the Chicago White Sox for the most in the majors — that led to a pair of unearned runs against the Mets. Pitchers Edwin Uceta and Taylor Widener also forced in runs by walking Travis Jankowski and plunking Marte, respectively, with the bases loaded in the seventh.

Cody Bellinger finally seems to be getting after it for the Dodgers, who are 11-4 this year.

The former National League Rookie of the Year and Most Valuable Player hit two homers and finished with four RBIs Sunday. He continues his recovery from a disastrous 2021 in which he batted .165 — the fourth-lowest batting average since 1900 for any player with at least 300 plate appearances.

“It’s not easy to struggle, being on this team,” fellow former NL MVP winner Clayton Kershaw said after he earned the win Sunday by allowing one run over five innings. “Definitely not a fun thing to go through, but it makes this that much sweeter, I bet.”

For Arizona, Kelly recorded the win last Wednesday when he allowed one run over six innings of an 11-2 victory over the Washington Nationals. Buehler took the defeat last Tuesday after surrendering three runs in five innings in the Dodgers’ 3-1 loss to the Atlanta Braves.