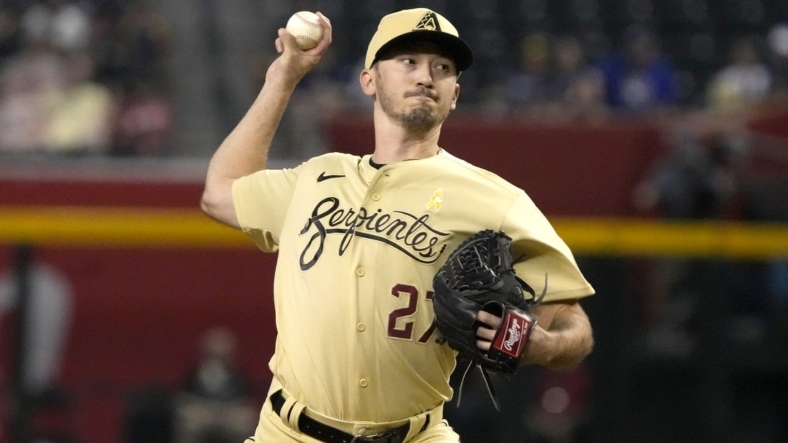 Emmanuel Rivera went 3-for-3 with an RBI, and five relievers combined for 4 1/3 scoreless innings as the Arizona Diamondbacks edged the Milwaukee Brewers 2-1 on Friday in Phoenix.

Following starter Zach Davies, Kyle Nelson (2-0), Reyes Moronta, Kevin Ginkel and Joe Mantiply preceded Ian Kennedy, who worked around a one-out single in the ninth for his 10th save in 14 chances.

The Diamondbacks have won seven of their last eight and are 23-16 since the All-Star break.

Willy Adames and Keston Hiura had two hits apiece for Milwaukee, which outhit Arizona 9-6 but went 0-for-3 with runners in scoring position while leaving 11 runners on base.

The Brewers have lost three of four to fall 7 1/2 games behind the first-place St. Louis Cardinals in the NL Central. They’re also 3 1/2 games behind San Diego for the third and final NL wild-card spot.

Milwaukee snapped a 14-inning scoreless streak with a run in the fifth. Davies was relieved by Nelson after allowing Adames’ two-out single.

Nelson walked Rowdy Tellez and Hunter Renfroe to load the bases, and a run scored when Andrew McCutchen walked on four pitches. Nelson then struck out Jace Peterson to end the inning.

Davies, who pitched for Milwaukee from 2015-19, allowed one run on six hits and one walk while striking out five over 4 2/3 innings.

Brewers starter Eric Lauer (10-6) faced the minimum number of batters through four innings before running into trouble in the fifth.

McCarthy moved to second on Stone Garrett’s single, but Lauer escaped further damage when Corbin Carroll grounded into a double play and Wilmer Difo popped out to the pitcher.

Lauer allowed two runs on six hits over 6 2/3 innings. He struck out five with no walks.

Milwaukee dropped the opener of the four-game series 5-0 on Thursday and has not homered in three straight games.

The Brewers fanned 12 times in Friday’s loss and have struck out 23 times in the first two games of the series.

Milwaukee left fielder Christian Yelich sat out due to neck discomfort and is listed as day-to-day.