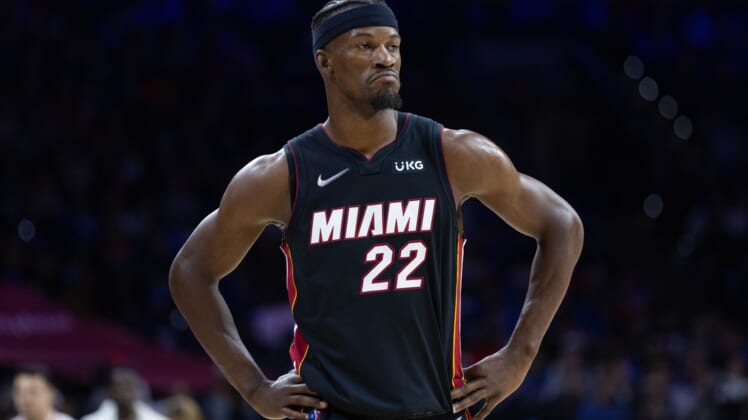 The Miami Heat, who have the best record in the Eastern Conference, are set to play host to the slumping Golden State Warriors on Wednesday night in a game that has lost quite a bit of luster.

Golden State will be without superstar guard Stephen Curry, who suffered a left foot injury last Wednesday against the Boston Celtics.

The Warriors have lost three straight games, including the past two without Curry.

Golden State’s slump was magnified on Tuesday night when the Warriors lost at the lowly Orlando Magic, 94-90. The Warriors turned the ball over 18 times.

“Without Steph,” Warriors forward Nemanja Bjelica said, “we have to play smarter. Everyone wants to win, but we need to slow down and do smarter things on the court.”

The Warriors also have to play better away from home. They are just 18-16 on the road, compared to their excellent 29-9 home mark.

“I feel like we’re at the top of the East for a reason,” said forward Jimmy Butler, who leads Miami in scoring (21.3) and steals (1.7). “We have a group of guys who want to win. We get along with each other. We play for each other — and that will be the biggest key down the stretch.”

The Heat are mostly healthy at the moment, although reserve guards Gabe Vincent (bruised toe) and Victor Oladipo (back spasms) missed the 76ers’ game.

Besides Butler, Miami’s core includes Tyler Herro, who averages 20.9 points and sparks the second unit; Bam Adebayo, who is third on the team in scoring (19.0) and first in rebounds (10.3); and Kyle Lowry, who tops the squad in assists (7.7).

Herro is having his best month of the season, averaging 24.3 points. He is shooting a sizzling 46.2 percent on 3-pointers in March. And his foul shooting in March also has been outstanding: 93.5 percent.

Butler, meanwhile, is having his worst month of the season, missing four of Miami’s 10 games. His scoring averaging in March (17.8) is his season low.

The last time the Heat played the Warriors was on Jan. 3, when Golden State won 115-108. Miami was without Adebayo in that game, and Golden State’s Klay Thompson hadn’t made his season debut yet.

Poole, Golden State’s first-round pick in 2019 — 28th overall out of the University of Michigan — has improved in each of his three seasons in the NBA. His scoring average has increased from 8.8 to 12.0 and 17.3.

He scored 26 points on Tuesday against the Magic, but his efforts were not enough to get Golden State a victory. The Warriors have now lost eight of their past 12 games.

Warriors coach Steve Kerr is hoping his team can ride its defense until Curry — an eight-time All-Star and two-time MVP — returns.

“If we can defend at a high level,” Kerr said, “we think that will translate to good offense.”