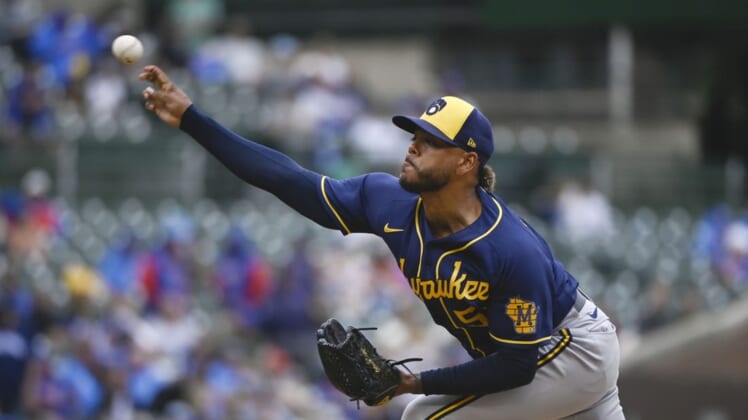 Nick Madrigal delivered a two-out, tying-RBI single off Devin Williams in the ninth, and Willson Contreras came through with his own tiebreaking hit in the 11th, as the Chicago Cubs won their fifth straight, 6-5 over the visiting Milwaukee Brewers on Saturday.

After Milwaukee went ahead on a run-scoring fielder’s choice in the top of the 11th, Chicago’s Patrick Wisdom tied it with a double in the bottom of the frame. Then with two out and a man on third,
Contreras lined a single to right — off Peter Strzelecki (1-1) — for the Cubs, who have won 11 of 15 overall and four straight against the Brewers.

Chicago went ahead 2-1 on Contreras’ two-run homer off Milwaukee starter Freddy Peralta in the fifth inning. The Brewers, though, took a 3-2 lead in the eighth when Willy Adames (two hits) also went deep with a man on off Chicago reliever Rowan Wick.

However, the All-Star Williams blew his first save in nine chances when he walked three, and gave up a bloop two-out, tying RBI single to Madrigal (three hits) during his 37-pitch ninth inning. Milwaukee went up 4-3 in the 10th on Mike Brosseau’s pinch-hit RBI single, but the Cubs tied it when Ian Happ scored from third after left fielder Christian Yelich dropped the ball while transferring it after a catch in the bottom of the frame.

Fighting for a fifth straight NL postseason appearance, Milwaukee has dropped 12 of 18.

After scoring twice in the first inning of Friday’s 8-7 loss, Milwaukee settled for a single run in the opening frame Saturday. Yelich opened the game with a walk, eventually made his way to third and scored when Chicago failed to complete a potential double play on Andrew McCutchen’s grounder to third.