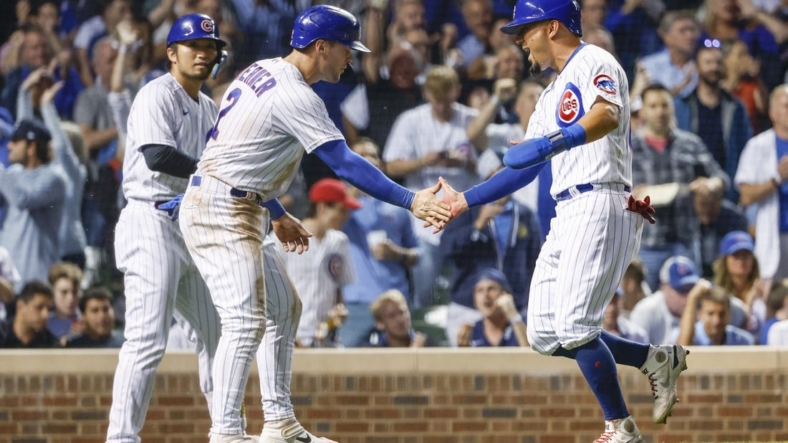 Javier Assad has enjoyed a strong start to his major league career with the Chicago Cubs.

Meanwhile, the Cincinnati Reds seem to be excited about their own young prospect, Spencer Steer.

Assad aims to continue his scoreless streak as a starter when the Cubs try for a second straight win over the visiting Reds on Wednesday night.

Not expected to be in the Cubs’ plans for 2022, Assad (0-0, 0.90 ERA) has been another pleasant surprise on the club’s dismal season. Joining potential budding Chicago stars like the versatile rookie Christopher Morel and reliever Brandon Hughes, the 25-year-old Assad threw four scoreless innings against St. Louis in his major league debut on Aug. 23, then five more without a run at Toronto on Aug. 29.

With those outings, the Mexican right-hander became the first pitcher since 1900 to begin a career with two straight scoreless starts against teams 10 or more games over .500, according to MLB.com.

“I’ve just been trying to be calm and focused out there,” said Assad, who yielded his first career run during an inning of relief at St. Louis on Friday. “Just trying to execute my pitches, follow the game plan. And that’s really helped build my confidence.”

Looking to help the Cubs (57-78) win consecutive contests for the first time since a five-game run from Aug. 16-20 following Tuesday’s 9-3 victory, Assad could face Steer. A top-10 prospect of the Reds, Steer is 3-for-12 with two doubles, a homer, four walks and an RBI in four games since making his big-league debut on Friday.

Speer’s ninth-inning double was one of four hits Tuesday by Cincinnati (53-80), which is 4-7 against Chicago this season.

“He’s a good kid and he’s going to have a good career,” teammate Jonathan India said of Steer, who has already seen time at third base, first as well as designated hitter.

While Steer has shown some early promise, veteran Kyle Farmer had a two-run triple and solo homer during Tuesday’s loss at Chicago. Farmer is 6-for-17 with two homers and five RBIs in his last four road contests.

Chicago all-star Ian Happ has never faced Minor, but with a homer Tuesday, he has 26 in 81 career games versus Cincinnati. Happ is also 9-for-22 with two home runs, two doubles and seven RBIs in his last six games against the Reds.

Morel had a hit and two RBIs on Tuesday and is batting .385 with nine RBIs in 10 games versus Cincinnati this season.

The Cubs placed All-Star Willson Contreras on the 10-day injured list with an ankle injury. Meanwhile, it’s uncertain if Cincinnati’s Nick Senzel will be available for the next two of this three-game set after he was scratched from Tuesday’s lineup, also with an ankle issue.