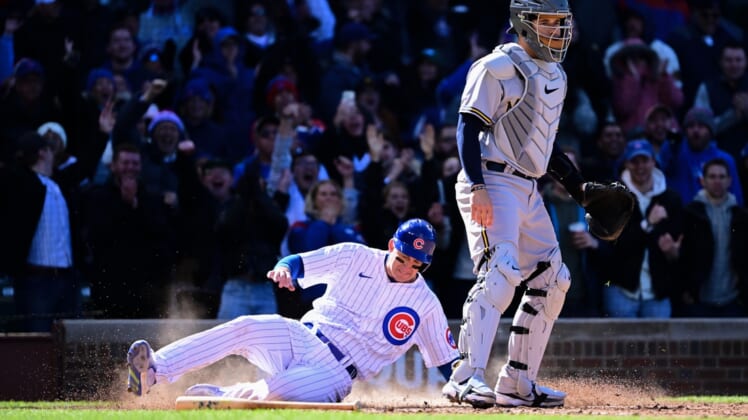 Justin Steele pitched five scoreless innings and Seiya Suzuki drove in three runs Saturday to lead the Cubs to a 9-0 victory over the visiting Milwaukee Brewers.

Ian Happ went 2-for-3 with two RBIs and three runs scored, while Rafael Ortega and Willson Contreras scored two runs apiece as the Cubs knocked off the Brewers for the second straight game.

The Cubs didn’t put the ball in play in taking the lead in their first at-bat against Milwaukee right-hander Brandon Woodruff, scoring three runs without the aid of a hit.

Ortega led off with a walk, took second when Nick Madrigal was hit by a pitch, and advanced to third when Contreras walked, loading the bases.

Woodruff issued his third walk of the inning to Happ, forcing Ortega home to give the Cubs a 1-0 lead. After Frank Schwindel grounded into a fielder’s choice that scored Madrigal, Suzuki pushed the lead to 3-0 with a sacrifice fly to right field.

That was more than enough for Steele (1-0). The right-hander allowed just four hits while striking out five and walking one in five innings. Keegan Thompson came in and didn’t allow a hit and struck out four over the next 2 2/3 innings.

After Suzuki’s single to center scored Happ to push the Cubs’ lead to 4-0 in the third inning, Chicago scored three more times in the fourth.

Happ’s two-out, run-scoring single to right ended Woodruff’s day, and reliever Jose Urena walked the first two hitters he faced, forcing in one run and uncorking a wild pitch that allowed another.

The Cubs tacked on a pair of runs in the sixth when Happ and Schwindel, who went 2-for-4 with an RBI, scored on Patrick Wisdom’s infield single.