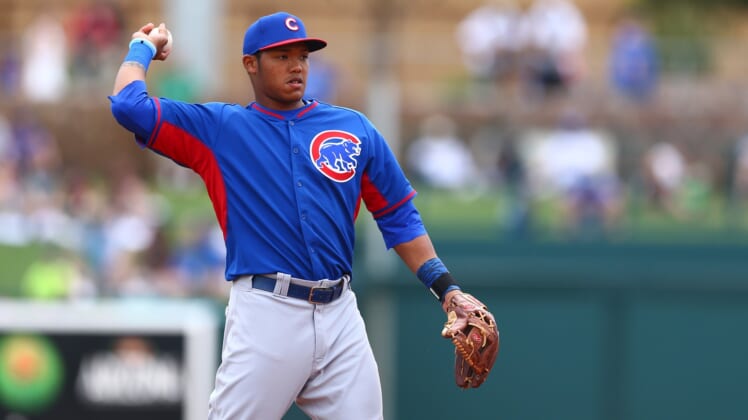 Addison Russell has been accused by his ex-wife of physical and mental abuse and was hit with a 40-game suspension by MLB over those allegations.

Now set to return to the Chicago Cubs, Russell is being embraced by his teammates as they prepare for spring training.

“We’re human. He made a mistake,” reliever Pedro Strop, per the Chicago Sun Times. “If he does the right thing, if he does whatever he needs to do, he’s going to be welcome to come back.”

Outfielder Albert Almora Jr. took it a step further, saying, “We call Russell family, he’s a brother.” He also added that, as long as Russell continues to take the proper steps in his treatment “we’ll welcome him back with open arms. Let’s let him gain our trust again.”

The Cubs tendered a low-risk contract to Russell last year, and the shortstop issued a statement apologizing for his actions.

“I offer my heartfelt apology to my family and my former wife Melisa for my past behavior,” Russell said. “I also want to apologize to Cubs fans, the Cubs organization, and my teammates for letting them down. Since accepting my suspension, I’ve had time to reflect on my past behavior and think about the next steps I need to take to grow as a person.”

The Cubs are clearly standing behind Russell at this time, yet based on all the comments from the team and the players, it’s contingent on him continuing to stay on the right path.

“We’re probably in the top of the second inning with this story,” general manager Theo Epstein said. “He’s got a ton of work ahead of him and it may not work, and if it doesn’t, we will move on instantaneously.”

Second chances only come once.