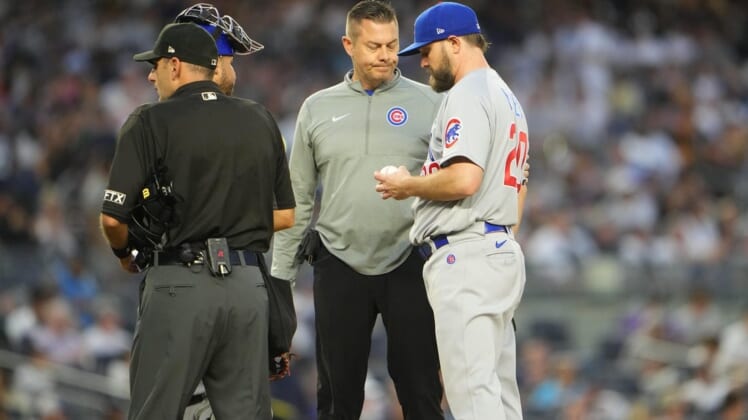 Chicago Cubs left-hander Wade Miley went right back on the 15-day injured list with a strained pitching shoulder on Saturday, one day after coming off the list with the same ailment to start against the New York Yankees.

Miley tossed three scoreless innings on Friday but had to exit after pain intensified while tossing his warm-up pitches prior to the fourth inning. Miley said he injured the shoulder while pitching to Josh Donaldson in the third inning.

“One pitch to Donaldson, I felt a little something back there,” Miley said after Friday’s game. “I tried to stay consistent in those remaining four or five pitches. In between innings, (the shoulder) calmed down a little bit. I tried to go back out.

“The first pitch I threw, (the pain) was there again. Rather than try to push it, I tried to do the smart thing, get it checked out and try to figure out what’s going on.”

Miley had last pitched on May 22 before Friday’s game.

Miley 35, missed the start of the season due to left elbow inflammation. He made his season debut on May 10.

Right-hander Michael Rucker was recalled from Triple-A Iowa in a corresponding move. Rucker was optioned to Iowa on Friday when Miley was activated.