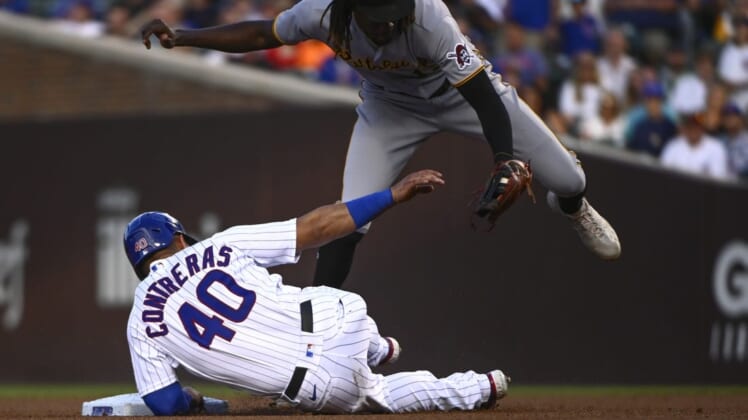 Nico Hoerner delivered a tiebreaking, RBI double in the eighth inning, and the Chicago Cubs won their season-high fifth straight contest, 3-2 over the visiting Pittsburgh Pirates on Monday night.

After Seiya Suzuki reached on Pittsburgh rookie shortstop Oneil Cruz’s throwing error, then advanced to second on a groundout while running with the pitch, Hoerner lined a two-out pitch from Yerry De Los Santos (0-2) into the right-field gap to break a 2-2 tie. Hoerner, who drove in the Cubs’ first run of the night and is batting .303 on the season, joined Rafael Ortega and Pittsburgh native Ian Happ with two hits for the game.

Meanwhile, Adrian Sampson allowed two runs, six hits and a walk, while striking out three, over a season-high seven innings on 100 pitches as the Cubs prevailed at home after sweeping a three-game weekend set at Philadelphia.

Cruz and Ke’Bryan Hayes had two hits apiece for the Pirates, who are 2-7 since winning four straight from July 9-12. Pittsburgh’s JT Brubaker also yielded a pair of runs, plus eight hits and two walks while fanning four before leaving with nobody out and a man on in the seventh.

After needing just six pitches to retire the Pirates in order in the first inning, Sampson endured a longer effort during the second. Ben Gamel opened the frame with a double and eventually scored on Cruz’s two-out single to right.

The Cubs, though, wasted no time tying the game in their half of the second. Happ doubled and scored on Hoerner’s single off the glove of second baseman Josh VanMeter. An inning later, Ortega, who entered amid an 0-for-29 slump, gave Chicago a 2-1 lead with his two-out home run over the right-field ivy.

Pittsburgh, though, tied the game in the fifth on VanMeter’s two-out, RBI double into the right-field corner.

Chicago’s Mychal Givens (6-2) struck out a pair in the eighth to earn the win. Meanwhile, Scott Effross stranded Cruz on first in the ninth to record his first career save.