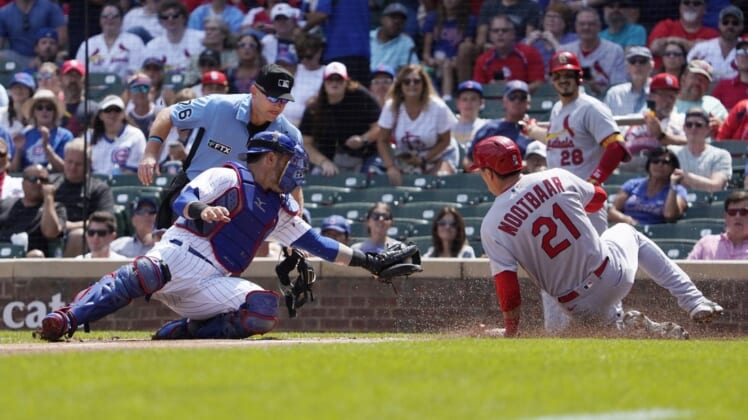 Javier Assad grinded out four solid innings in his major league debut as the Chicago Cubs halted the visiting St. Louis Cardinals’ winning streak at eight games with a 2-0 victory in Game 1 of Tuesday’s doubleheader.

Matched up against 40-year-old Adam Wainwright (9-9), Assad, 25, more than held his own while becoming the seventh pitcher to make his major league debut for Chicago this season.

Though the right-hander, who posted a 2.66 ERA between Double-A and Triple-A this season, did not qualify for the victory, he kept the Cubs in the game. He allowed four hits and four walks while pitching into the fifth.

According to the Cubs, Assad is the club’s first pitcher since Ryan O’Malley in 2006 to pitch at least four scoreless innings in their major league debut.

The Cubs struck for the game’s only runs in the bottom of the third on Nico Hoerner’s RBI groundout and a run-scoring single from Seiya Suzuki. The runs snapped Chicago’s 16-inning scoreless drought.

The Cubs improved to 18-12 since the All-Star break.

That was all the scoring the Cubs could muster against Wainwright, who surrendered five hits and four walks in six innings. He struck out three.

The NL Central-leading Cardinals, who had won 17 of their previous 20, left 11 men on base, wasted three leadoff doubles and went 0-for-10 with runners in scoring position. Their eight-game winning streak was a season-high.

St. Louis scored at least five runs in seven straight games before pulling out a 1-0 victory in the opener of this five-game set, and were then shut out for the first time since July 14.

Chicago relievers Michael Rucker (3-1), Sean Newcomb, Erich Uelmen and Brandon Hughes (third save) held the Cardinals to a hit and fanned two without a walk.