Cubs’ early lead holds up in win over Rockies 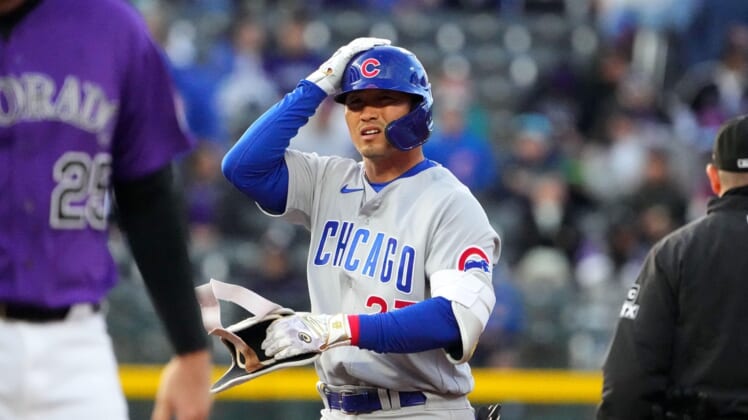 Frank Schwindel homered, Jonathan Villar, Nick Madrigal and Yan Gomes each had two hits and scored as the Chicago Cubs beat the Colorado Rockies 5-2 in Denver on Thursday night.

Keegan Thompson (1-0) tossed 3 1/3 innings of scoreless relief and Mychal Givens picked up his first save for the Cubs.

Chicago wasted no time in getting to Rockies starter Kyle Freeland. In the first inning, Madrigal and Villar singled with one out and ended up on second and third.

Schwindel’s single to shortstop scored Madrigal with the first run and allowed Villar to advance to third. An errant pickoff throw by catcher Elias Diaz brought home Villar, and Seiya Suzuki’s soft line-drive single to center drove in Schwindel to make it 3-0.

Another single and a hit batter loaded the bases with one out, but Freeland got Ian Happ to ground into an inning-ending double play.

It stayed 3-0 until the fifth inning, when Colorado put together a rally. Ethan Roberts relieved starter Justin Steele with one out and got Bryant to hit into a forceout.

With runners on first and second, Cron doubled to center to score Charlie Blackmon and move Bryant to third. Roberts then walked Brendan Rodgers and Ryan McMahon to bring home another run.

Thompson came on and got Diaz to line out to end the inning.

Steele allowed two runs on five hits and struck out four in 4 1/3 innings.

Schwindel led off the sixth with his first home run of the season to make it 4-2. After a pop-out, Gomes doubled, Michael Hermosillo walked and Happ singled to drive in Gomes and chase Freeland.

Ashton Goudeau came on and got Patrick Wisdom to hit into an inning-ending double play.

The Rockies had baserunners in the last four innings but never threatened to score.