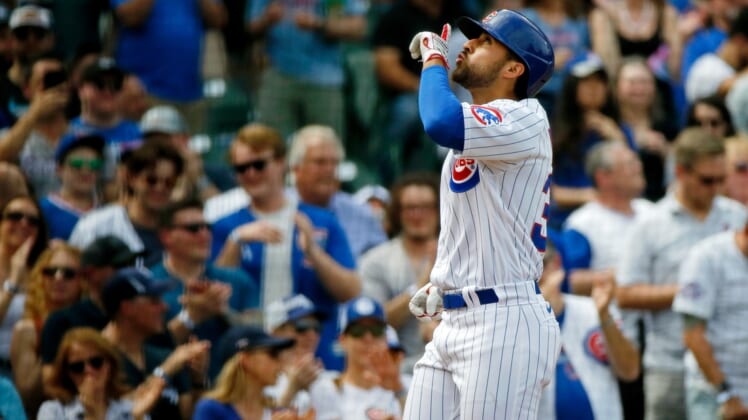 Alfonso Rivas clubbed a three-run homer during an eight-run second inning, and had five RBIs, while Nico Hoerner posted a career-high four hits and Kyle Hendricks yielded two of Pittsburgh’s three hits over seven innings, as the Cubs snapped a four-game losing streak with Saturday’s 21-0 rout of the visiting Pittsburgh Pirates.

In his fourth game of 2022, Rivas’ second career homer landed high into the right-field bleachers and added to the misery of Pittsburgh starter Zach Thompson (0-2) during the Cubs’ breakout second. Rivas also delivered run-scoring singles in the fourth and during a five-run fifth to cap his career day for Chicago, which posted its highest-scoring contest since a 26-7 win at Colorado on Aug. 18, 1995.

The Cubs had 23 hits in the largest shutout victory since at least 1901.

Hoerner followed a three-hit night with a career day, that also included three RBIs. Seiya Suzuki, Willson Contreras and Ian Happ each had three hits and combined for six RBIs for the Cubs, who scored 12 runs in their previous four contests.

Hendricks (1-1) cruised in the longest outing of any 2022 Cubs starter. Daniel Vogelbach’s ground-rule double in the fourth, Cole Tucker’s sixth-inning single and Anthony Alford’s infield hit in the ninth was all the offense mustered by the Pirates, who won the first two of this four-game set.

According to STATS, this is the most runs Pittsburgh has allowed since a 21-4 loss to the New York Giants on May 25, 1954.

The Cubs opened the scoring with straight singles from Suzuki, Conteras and Happ in the first. They rapped out four consecutive singles in the second, with an RBI from Suzuki and two via Contreras for a 4-0 lead.

Two errors by Pirates shortstop Kevin Newman, sandwiched by a walk, led to two more runs for Chicago in the second. Rivas’ homer made it a 9-0 game.

Thompson yielded nine hits while walking two in just two innings of work, but only four of the nine runs he gave up were earned.

Chicago added two more runs in the fourth, before breaking out again in the fifth. The Cubs added another in the seventh and four with Pittsburgh rookie infielder Diego Castillo on the mound in the eighth.