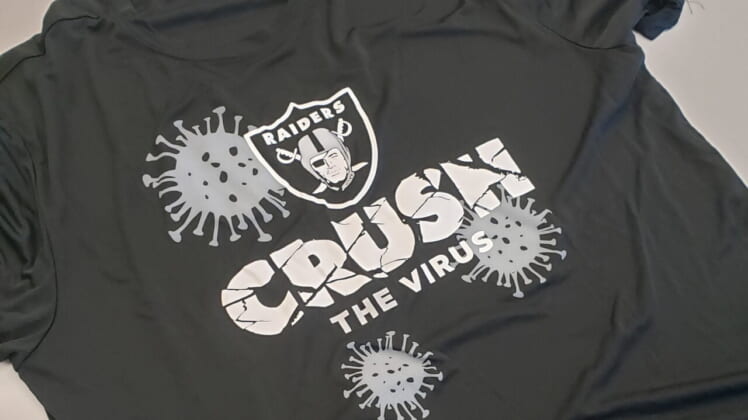 The latest rash of COVID controversy inside the Las Vegas Raiders organization points to the need for the organization to walk the walk, not talk the talk.

Let’s skip all the stats and game plans for a moment. Before the season started, Las Vegas Raiders head coach Jon Gruden had one clear-cut objective – crush the virus. COVID was top of mind – as it should be.

Gruden wore the message on a T-shirt. He even battled the virus during the summer.

“…It’s a very serious matter and, you know, obviously, I’m sensitive about it,” Gruden said. “But yeah, it was a tough ordeal, that’s for sure. Just like everybody else that had it.”

So one would assume Gruden’s team would go about its business with a high level of caution. On the contrary, the Raiders have let their guard down too often. They’ll go into Week 7 with a 3-2 record, but the scorecard against COVID-19 has four strikes on it.

The latest is the positive test that came back on right tackle Trent Brown, which has resulted in the team losing its coveted Sunday Night Football slot against the Tampa Bay Buccaneers on Sunday.

Let’s take a look at the timeline:

During a Monday Night Football game, Gruden and New Orleans Saints head coach Sean Payton didn’t cover their faces with masks on the sideline. The league fined them $100,000 apiece and their respective squads $250,000, per NFL Network’s Ian Rapoport:

“I’m calling plays,” Gruden said. “I just want to communicate in these situations, and if I get fined, I’ll have to pay the fine. But I’m very sensitive about that and I apologize.”

In the heat of the moment, for the first game at Allegiant Stadium, with new regulations, we can see this as a minor slipup.

However, on the same day, the Raiders allowed a non-credentialed employee into the locker room after their win over the Saints, which triggered an additional $50,000 fine, per Rapoport:

OK, with an emotional win over the Saints in a new building, perhaps the postgame celebration went a step too far. Fine. The Raiders can learn and move on from this, right?

Darren Waller’s Foundation hosted an event for a good cause, raising $300,000 for young people struggling with drug and alcohol addiction. While that’s a commendable deed, video footage caught players without masks on, which again, triggered more fines, per Rapoport:

Before the event, the NFL sent out a memo with strict guidelines.

“The NFL on Thursday sent a memo to all 32 teams reinforcing post-exposure coronavirus protocols,” Sam Gordon of the Las Vegas Review-Journal wrote. “The memo reaffirmed that the NFL forbids the participation of its players from gatherings such as Monday’s Darren Waller Foundation event. ‘No team or player gatherings or group football activities will be permitted away from the facility,’ the memo said.”

In the opening moments of a media presser on September 30th, quarterback Derek Carr, who attended Waller’s charity event, briefly discussed reports about the team’s violations.

“I feel like, one, we’ve done a fantastic job here, and I hate that a few moments without our masks on led to a story about our team,” Carr said. “So we felt terrible about that. We addressed it.”

We can forgive this misstep because the charitable cause for the youth outweighed the punishment for the players. No one tested positive as a result of the event, and this time, the Raiders learned from their mistake, right? According to The Athletic’s Vic Tafur, the team certainly thought so.

“It’s my understanding that the players won’t be disciplined, as they have learned their lesson and the team didn’t want to fine them for something that happened at a charity event,” Tafur wrote.

While we should expect COVID to spread and plenty of positive cases to pop up, players have to do their best to minimize the probability of outbreaks by following the league’s protocols.

Defensive tackle Maurice Hurst and cornerback Damon Arnette tested positive over the past two weeks, but their cases didn’t lead to a thorough investigation. Trent Brown’s situation falls into a different category.

According to NFL Network’s Tom Pelissero, the league has an alleged video of the Raiders offensive linemen together without masks, and there are questions as to whether Brown consistently wore his tracking device, which allows officials to trace anyone around him before a positive test:

For safety measures, the NFL deemed every player in contact with Brown high-risk and subject to five days of isolation. As a result, his fellow offensive linemen, Kolton Miller, Richie Incognito, Rodney Hudson, Gabe Jackson, and safety Johnathan Abram went on the reserve/COVID list Thursday.

Conclusion: Lack of Accountability And Negligence Lead to Consequences

We all make mistakes, but the Raiders have shown a pattern of lapses in judgment from the staff to the players over the last four weeks. Even at practice in the presence of coaches, some individuals failed to follow an “intensive” protocol after the team placed Arnette on the reserve/COVID list, per Josh Dubow of the Associated Press.

No more pardons for irresponsible actions and blatant disregard for the rules. At what point does the team’s leadership hold others accountable? An apology means nothing without a change in behavior.

No more pardons for irresponsible actions and blatant disregard for the rules. At what point does the team’s leadership hold others accountable? An apology means nothing without a change in behavior.

Although unfair on the surface, the Raiders may have to take the field without their starting offensive line against the Tampa Bay Buccaneers. Abram had close contact with Brown Tuesday, which means he won’t clear the five-day isolation period in time to play Sunday, per Rapoport.

Brown is the only player from the most recent incident who tested positive for COVID. If the other four players continue to come back with negative test results, they can rejoin the team (following five days of quarantine) and suit up Sunday, but none of them practiced this week.

The NFL moved the Raiders-Buccaneers game up from the Sunday night primetime slot to 4:05 p.m. ET/1:05 p.m. PT, which allows room to reschedule for Monday or Tuesday in case players in close contact with Brown test positive over the next couple of days. The league also needed to avoid an uncertain situation and secure a marquee matchup for the national audience.

While we can point to what the Tennessee Titans had done with unauthorized practices during a facility shutdown as arguably the most egregious violation, another squad’s poor judgment doesn’t give any team the green light to forego its accountability in the grand scheme of things. Someone else’s wrong shouldn’t discourage you from doing the right thing.

Yet, as outlined above, the Raiders are repeat offenders. We often talk about self-inflicted errors on the football field in terms of penalties. This season, off-field miscues can have a more dramatic effect, and this squad has to clean up its act leading up to game days.

Regardless of the circumstances, the Raiders’ negligence may finally cost them. This isn’t an instance of the league picking on one team. The Silver and Black has created its own issues with negative press in stories tied to COVID-19.

Gruden cannot babysit 69 grown men, but at this point, he has to discipline players who put the team in a bind with conscious decisions to violate rules because his message isn’t coming across effectively. Perhaps the club has to make an example out of someone.

Regardless of how the Raiders feel about the league’s COVID-19 procedures, everyone knew what they signed up for during the offseason. Every player had the choice to opt-out of the 2020 campaign. In an agreement to suit up, you accept the work conditions.

We cannot blame a player for a positive COVID-19 test result. Some individuals who follow the rules will contract the illness anyway. With that said, as an organization, the Raiders still have a lot of work do in “crushing the virus.” If anything, over the last four weeks, they’ve cracked the door open for it.