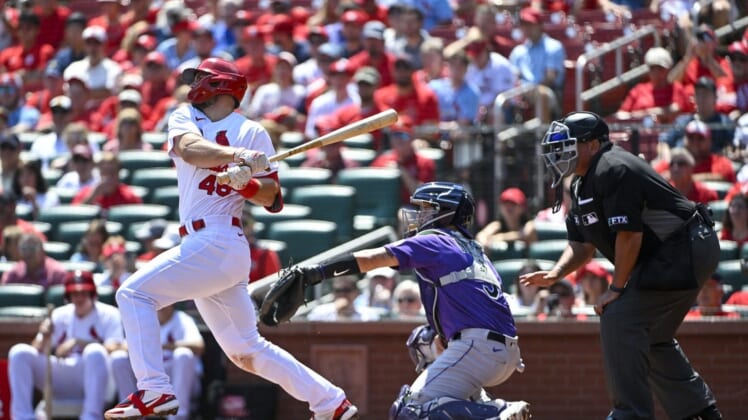 The red-hot St. Louis Cardinals will aim to stretch their winning streak to five games when they square off against the Arizona Diamondbacks on Friday night in the opener of a three-game set in Phoenix.

The Cardinals have outscored their opponents 29-8 during the four-game span, including trampling the Colorado Rockies 23-5 during a three-game set.

Overall, St. Louis has won 15 of its past 19 games, capped by a 13-0 pounding of the visiting Rockies on Thursday.

One of the heroes was Albert Pujols, who hit a pinch-hit grand slam and finished with five RBIs. The blast was his 11th of the season and the 690th of his career.

“We’re playing well right now — I think the way that we were expecting ourselves to play early in the year,” Pujols said. “We didn’t, but we had some glimpses here and there. Now we’re playing the best baseball we have played all year long.”

The recent stretch has allowed St. Louis to take a three-game lead over the Milwaukee Brewers in the National League Central.

Paul Goldschmidt went 3-for-4 with two RBIs on Thursday and is swinging a hot bat as he returns to his former stomping ground in Phoenix.

Goldschmidt spent 2011-18 with Arizona and earned six of his seven All-Star appearances while with the franchise. He is batting .262 with four homers and 13 RBIs in 16 career games vs. the Diamondbacks.

Arizona has won eight of its past 12 games and is fresh off a four-game road split against the San Francisco Giants. The Diamondbacks won 5-0 on Thursday.

Arizona lost the second game of the series when San Francisco’s Brandon Crawford hit a walk-off, two-run homer in the ninth. The Diamondbacks bounced back for a 3-2 win on Wednesday before Zac Gallen’s strong pitching helped lead to the Thursday victory. Gallen struck out 12 in 7 1/3 scoreless innings.

“This is an important win,” Diamondbacks manager Torey Lovullo said following the series finale. “We haven’t won a lot in this venue. I don’t want the guys to shut down, so I was really trying to trigger them and tell them, ‘We’ve got to stay on this, let’s keep going.'”

Rookie outfielder Stone Garrett made a strong impression in the two Arizona victories, which were his first two major league games after eight minor league seasons. Garrett went 4-for-8 with three doubles, one RBI and one stolen base.

St. Louis All-Star right-hander Miles Mikolas (9-9, 3.44 ERA) will try to cool down Garrett in the opener.

Mikolas, who will turn 34 on Tuesday, is coming off a strong outing against the Brewers. He gave up two runs and four hits over eight innings of a 6-3 victory on Sunday.

That was a strong bounce-back showing after he was demolished by the Rockies five days earlier, when he gave up 10 runs and 14 hits in 2 2/3 innings.

Mikolas lost to Arizona on April 30 when he gave up two runs and four hits over 7 1/3 innings. Ketel Marte and Nick Ahmed hit eighth-inning homers in the Diamondbacks’ 2-0 win.

Overall, Mikolas is 1-1 with a 2.55 ERA in four career appearances (two starts) against Arizona.

Left-hander Tommy Henry (2-1, 4.15) will make his fourth career start for the Diamondbacks. The 25-year-old has won his last two outings, including a win over the Rockies on Sunday when he allowed three runs and five hits over 5 1/3 innings.