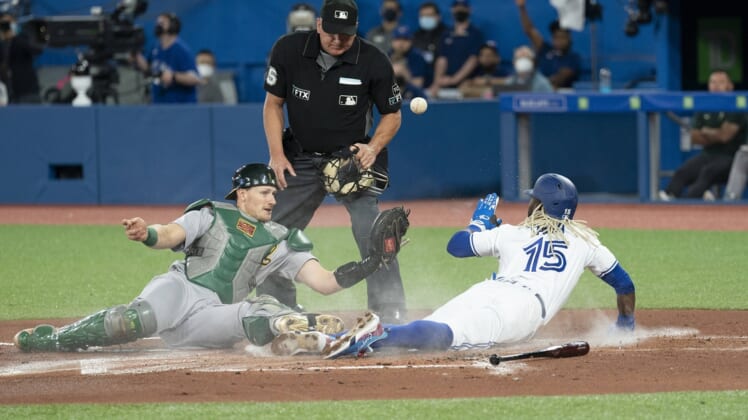 Cristian Pache hit a two-run home run in the top of the ninth inning and the visiting Oakland Athletics defeated the Toronto Blue Jays 7-5 Saturday afternoon.

Lou Trivino pitched around a leadoff walk in the bottom of the ninth with three strikeouts for his second save of the season.

Sean Murphy also hit a two-run homer for Oakland as the teams have split the first two games of a three-game series.

Toronto starter Hyun Jin Ryu allowed five runs and six hits in four innings, with one strikeout and no walks. Oakland starter Paul Blackburn fared better, allowing two runs and five hits in five innings, striking out three without a base on balls.

Toronto scored once in the bottom of the fourth on an infield hit by Lourdes Gurriel Jr. followed by singles by Chapman and Collins.

Trent Thornton replaced Ryu in the fifth and allowed one hit in two innings.

Domingo Acevedo replaced Blackburn in the sixth and allowed a two-out single to Gurriel, then back-to-back homers by Chapman (second of season) and Collins (his first). Acevedo allowed two more singles before Justin Grimm replaced him.

Oakland’s Dany Jimenez (1-0) caught Gurriel looking at a third strike to start the bottom of the eighth. Blue Jays manager Charlie Montoyo was ejected by home plate umpire Jeff Nelson for arguing. Jimenez also struck out the next two batters.