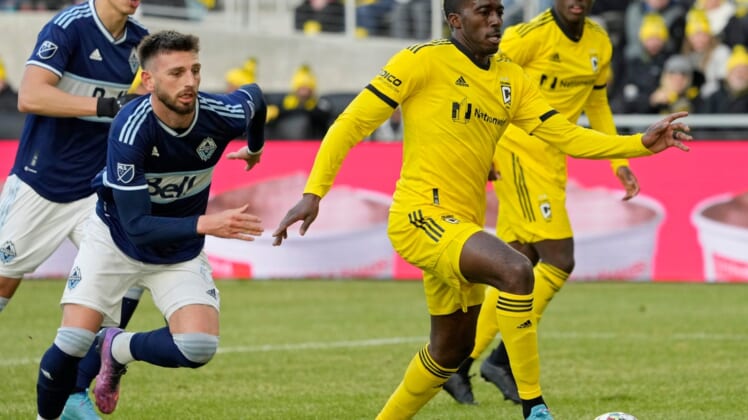 The Columbus Crew will seek to extend several streaks when they host Nashville SC on Saturday.

Columbus (2-0-2, 8 points) has a seven-match unbeaten streak (5-0-2) dating back to last season, winning all four home games during that stretch.

Unfortunately for the Crew, they might face Nashville (1-2-1, 4 points) without MLS March player of the month Lucas Zelarayan, who co-leads the league in goals created with four goals and two assists.

He sustained a right knee injury against the New York Red Bulls on March 20. He is listed as questionable but was at training on Friday.

The Crew is 2-0-2 vs. Nashville, including a victory in the 2020 MLS playoffs against the expansion team.

Columbus is the only team Nashville has played more than twice without beating them in MLS play.

“It’s a good team,” Crew coach Caleb Porter said of Nashville. “That’s why they were in the playoffs in the semis of the conference last year. So, it won’t be easy. It’d be a very naive thing to do to underestimate their team even though they’ve not been getting as many results to start the year.”

Nashville is halfway through an eight-game trip to open the season before christening its 30,000-seat stadium on May 1.

“I’d love a point or two more at this stage,” Nashville coach Gary Smith said. “But really for us it’s to be in a position when we come back home on May 1 where we’re in a competitive spot, and we’re hopefully in a position to mount a challenge for the postseason and we don’t give ourselves too much work to do. Anything we can get at this point is going to make that task that much easier.”

Nashville, which has lost two straight, is expected to have Walker Zimmerman in the lineup.

The defender is coming off starting three matches for the U.S. men’s national team in the latest window to help them qualify for the World Cup in November.