Creighton puts No. 9 ranking on display against the Tommies 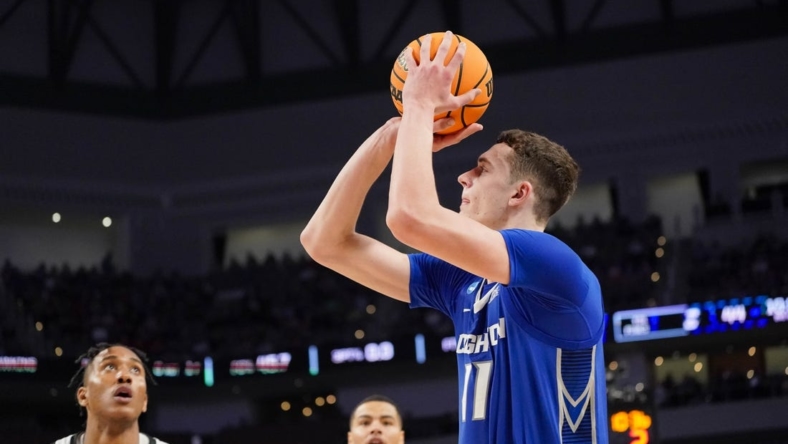 Expectations are high for No. 9 Creighton ahead of the 2022-23 season, and for good reason.

Buoyed by the addition of highly touted transfer guard Baylor Scheierman and a new contract for coach Greg McDermott, the Bluejays begin their campaign by hosting St. Thomas-Minnesota on Monday night in Omaha, Neb.

Creighton, tabbed to finish first in the Big East Preseason Coaches’ Poll, returns three double-digit scorers from last season’s club. That team finished with a 23-12 record overall and advanced to the second round of the NCAA Tournament before falling to eventual champion Kansas.

“I think we’re where we need to be,” McDermott said after the Bluejays breezed to a 109-52 exhibition victory over Division II Drury on Sunday. “The unselfishness was on display tonight, and that has to be something that we hang our hat on throughout the year.”

Scheierman collected 14 points, 10 rebounds and seven assists in the win over the Panthers.

Scheierman, the reigning Summit League Player of the Year at South Dakota State, announced in May that he was transferring to Creighton. The Nebraska native reportedly picked the Bluejays over Arkansas, Clemson, Duke and Nebraska.

In addition, Trey Alexander showed glimpses of what he hopes is a better perimeter game by sinking a trio of 3-pointers to finish with 15 points against Drury.

“It’s been a lot of shots up in the gym,” Alexander said. “I’ve been working on my shoulder, I feel like that’s something that had a lot to do with the way I was shooting the ball last year. … It was a good start to the season, though. I’m proud of that.”

Creighton will face a St. Thomas team that was selected to finish eighth in the Summit League Preseason Coaches’ Poll. The Tommies finished with a 10-20 overall record and 4-14 mark in conference play while competing in their inaugural Division I season.

“Even some of the losses we were competitive for the most part, and most of our games outside of like two or three, we had a chance to win five minutes from the end,” said guard Riley Miller, who averaged a team-best 15.4 points per game last season. “It was good to see especially with some of the guys that aren’t with us this year that graduated or moved on.”