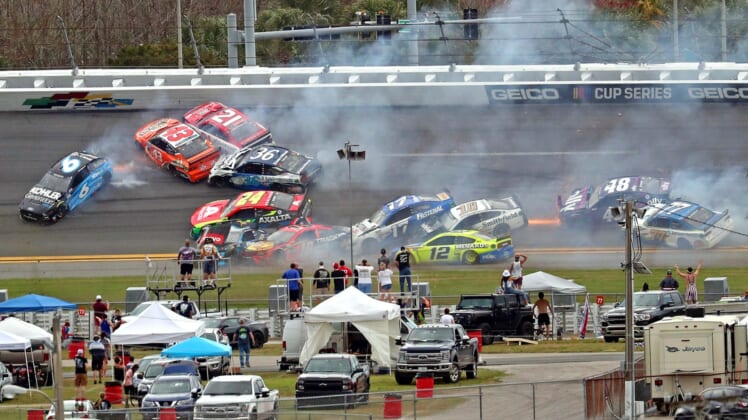 Rain and lightning forced the Daytona 500 to go under a red flag after just 15 laps on Sunday.

The storm hit as track workers were cleaning up after a 16-car wreck.

The crash occurred as the field went down the backstretch heading into Turn 3, when contact from behind by Christopher Bell sent Aric Almirola spinning into pole sitter Alex Bowman as they were trying to move into second place behind leader Kevin Harvick.

“We were just getting pushed too hard too early,” Almirola said, per NBC Sports. “It’s a long, long race. Man, we were in a fine position, just sitting there riding around in the top two, three and the 20 (Bell) just came with a big run and hit me really hard in a bad spot and it turned me to the right and tore up our race car and ended our Daytona 500 way too early.”

Before the race, 10 cars were moved to the rear of the field after failing pre-race inspection.

Among them was the No. 23 car driven by Bubba Wallace, which failed the inspection twice. Wallace was set to start sixth in the first NASCAR Cup race for his new team, 23XI Racing, which is owned by Michael Jordan and Denny Hamlin.

Because of the multiple failures, car chief Greg Emmer was ejected.

Wallace was the runner-up to Austin Dillon in the 2018 Daytona 500.