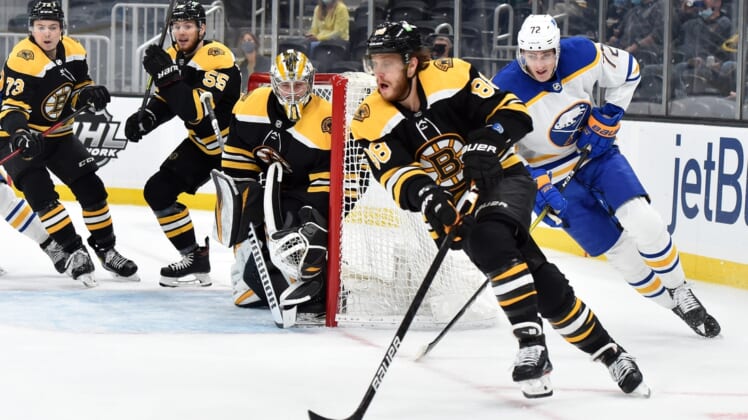 Craig Smith recorded his second career hat trick and David Krejci assisted on all three goals, as the surging Boston Bruins won their third in a row, 6-2 over the visiting Buffalo Sabres on Saturday.

Smith opened the scoring, then completed the hat trick with two goals in the third for Boston (30-14-6, 66 points), which owned a 43-19 shot advantage while winning for the ninth time in 11 games.
Nick Ritchie had a goal with an assist while Sean Kuraly and Patrice Bergeron also scored for the Bruins, who are closing in on a playoff spot in the East Division following their six consecutive home victory.

Riley Sheahan and rookie Arttu Ruotsalainen scored for Buffalo, and netminder Ukko-Pekka Luukkonen made 26 saves in his fourth NHL start before he was helped off the ice with an apparent lower-body injury at the end of the second period. The Sabres (13-32-7, 33 points) have dropped four straight and six of seven.

Boston wasted no time as its strong second line came through 1:21 into the game. Off some tic-tac-toe passing with linemates Taylor Hall and Krejci, Smith (13 goals) came through.

Buffalo tied it with 7:25 left in the opening period. Sheahan came out of the penalty box with his team still down a man, picked up the puck just past center ice then broke free and beat Bruins netminder Jeremy Swayman (17 saves) for the shorthanded goal.

The Bruins went back ahead with 3:22 remaining in the first when Kuraly pounced on the puck and flipped it by Luukkonen. Boston made it 3-1 after Bergeron put in the rebound of his own deflection at the 5:36 mark of the second.

Ritchie tipped in Matt Grzelyck’s rocket from just outside the top of the circle to give the Bruins’ a 4-1 advantage at the 3:18 mark of the third. Smith’s second goal of the game came a little more than two minutes later before Ruotsalainen scored his fifth to give the Sabres some late life.

Smith’s final score came on the power play with 5:55 remaining in regulation. His previous hat trick was against the New York Islanders on Feb. 13, 2020.

Dustin Tokarski stopped 11 of 14 shots in relief of Luukkonen.

Boston outscored Buffalo 32-16 while going 7-1-0 on the season series.