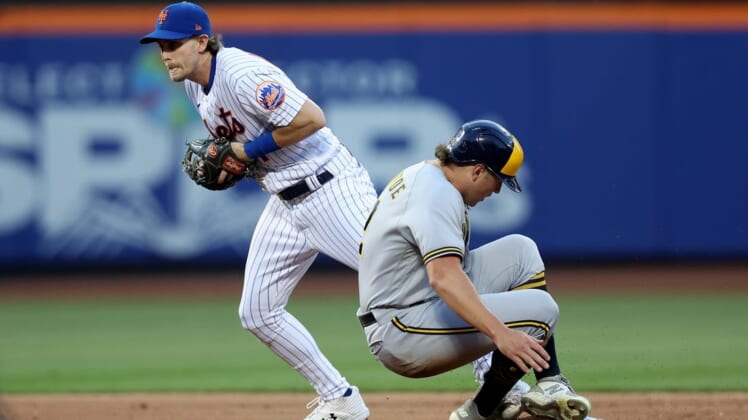 Craig Counsell became the winningest manager in Milwaukee Brewers history Wednesday night as they rode a seven-run fifth inning to a 10-2 victory over the host New York Mets.

The win — just Milwaukee’s third in 13 games this month — was Counsell’s 564th as Milwaukee manager, breaking a tie with Phil Garner. Counsell has managed 108 fewer games than Garner.

The Mets’ lead in the NL East slipped to four games over the surging Atlanta Braves, who won their 14th straight on Wednesday.

The seven runs in the fifth inning were more than the Brewers scored in any of their first 12 games this month.

Milwaukee sent 13 batters to the plate against three Mets pitchers in the inning, which included Victor Caratini drawing a bases-loaded walk, an RBI single by Lorenzo Cain, a two-run double by pinch-hitter Jace Peterson, a two-run single by Willy Adames and an RBI single by Andrew McCutchen.

Adames had two hits in the inning and three overall, including a double that jump-started the Brewers’ two-run first against David Peterson (3-1), who plunked McCutchen and Hunter Renfroe before giving up a two-run single to Luis Urias.

Mark Mathias hit into a run-scoring fielder’s choice in the fourth.

Jeff McNeil accounted for both RBIs by the Mets with a fourth-inning solo homer and a sixth-inning RBI single that scored Brandon Nimmo, who had two hits.

Mets right fielder Starling Marte left after he was hit on the right hand by a Burnes pitch in the sixth inning. X-rays were negative for a fracture and he is day-to-day.