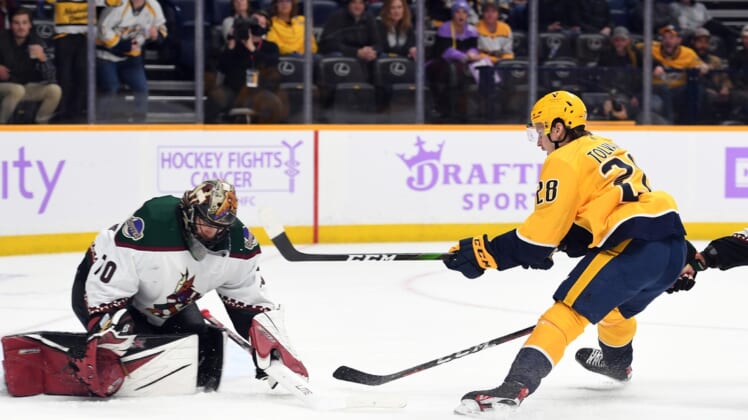 The Nashville Predators continue to rack up the victories, and not just because of their potent offensive attack.

As the Predators conclude a three-game road trip with Saturday’s clash against the Arizona Coyotes, they are riding a three-game winning streak — and 10-1-1 run in their last dozen games — thanks to a season-high 46 saves by goaltender Juuse Saros in Thursday’s 4-2 win over the Los Angeles Kings.

“I think you can ask any guy in this room, there’s no other goalie I’d rather have in my net than him,” forward Matt Luff said of Saros. “He makes key saves when he has to … I just think he’s the best goalie in the league, without a doubt.”

Surrendering 48 shots on net, though, is something the Predators will look to address against the Coyotes, although Saros doesn’t mind seeing plenty of pucks.

“I like when there’s a lot of action going on,” Saros said. “There’s a lot of shots from the outside too, that aren’t all like Grade-A scoring chances, but you kind of just go with the flow on those games.”

It doesn’t hurt that the Predators are boasting a strong offensive touch, too, with Filip Forsberg leading the way. Forsberg, who is riding a three-game scoring streak in which he’s netted four goals, has tallied seven times in the last seven games.

It adds up to putting the Predators atop the highly competitive Central Division in which four teams are separated by four points.

“You have to find different ways to win,” coach John Hynes said. “We are able to do that.”

Speaking of offensive attack, the Coyotes are showing more of late, too. Arizona, which sits last in the league standings, has cobbled together a 2-1-1 record in its last four games and scored 20 goals in that stretch — capped by a 6-4 victory over the Chicago Blackhawks on Thursday. By comparison, the Coyotes managed only 50 goals in their first 28 games.

Not only did forward Johan Larsson record his first career hat trick against the Blackhawks, but the Coyotes scored a pair of power-play goals for the second time in three outings.

“I always think when your power play generates momentum, that means your best players are doing good things,” coach Andre Tourigny said. “That means they play with confidence and (it) translates to five-on-five play.”

Larsson scored his first three goals of the season against Chicago, but it is the continuation of his improved play of late. After a horrible start to the season due to injury and illness, Larsson has managed six points in the last three games.

“It’s crazy. You go a lot of games without a goal, and one goes in, you feel better. It just hits your stick and goes in,” Larsson said. “Now that I got the first one out of the way, you kind of just go from there. I got a couple of good passes, so it was kind of easy. … It’s nice to go out and get some goals and get the confidence going.”

The Coyotes are playing with confidence, which is important for such a young squad struggling to gain momentum.

“Some of these games it feels like you’re playing three games in one,” defenseman Shayne Gostisbehere said. “There’s a lot of ups and downs. It’s a lot of emotions on the bench. It’s good for our young guys to get that experience and see what it takes to get two points in this league.”