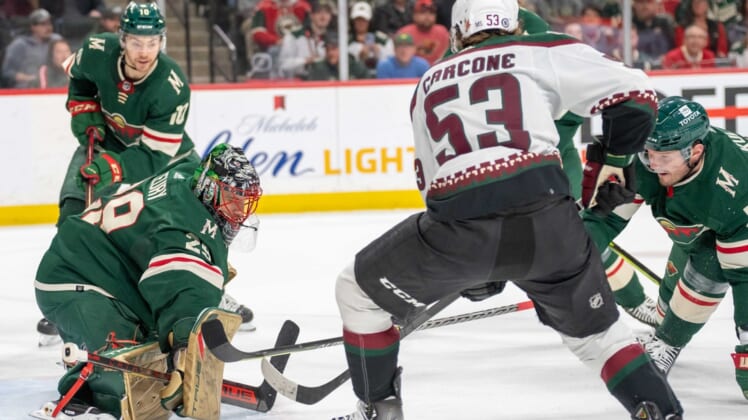 Anton Stralman and Phil Kessel each had a goal and an assist as the visiting Arizona Coyotes snapped a 10-game losing streak with a 5-3 win against the Minnesota Wild on Tuesday in Minneapolis.

Joel Eriksson Ek and Marcus Foligno each had a goal and an assist, and Kirill Kaprizov had two assists for the Wild (51-22-7, 109 points), whose five-game winning streak and 10-game point streak ended after going 8-0-2 in that stretch. The Wild remain tied for second in the Central Division with St. Louis, pending its game at Colorado Tuesday.

Marc-Andre Fleury made 21 saves for Minnesota.

Ryan Hartman gave the Wild a 1-0 lead at 11:05 of the first period with his 34th goal of the season. Matt Boldy banked a long cross-ice pass from the right wall inside the Minnesota zone to Hartman along the left wall by the Arizona blue line. Hartman skated in and drove to the net, lifting the puck to the top corner stick-side.

Stralman tied it 1-1 at 18:15 of the second period. Nick Schmaltz found him streaking into the zone and fed him with a cross-ice pass, with Stralman beating Fleury in the far top corner from the right faceoff dot.

Arizona took a 2-1 lead 20 seconds into the third period. Rookie forward Jack McBain, a Wild third-round draft pick in 2018 traded to the Coyotes prior to the NHL trade deadline, redirected Stralman’s point shot in the slot for his first NHL goal.

Antoine Roussel made it 3-1 at 2:56 when he took a feed from Gostisbehere and broke in, sliding the puck five-hole on Fleury.

Eriksson Ek narrowed it to 3-2 about two minutes later, picking up a rebound at the right of the net and going for the wraparound. His attempt hit the post but he made quick work of his second try into an open net. He has five goals in his past three games.

Foligno tied it 3-3 just 24 seconds later, connecting on an Eriksson Ek feed at the front of the net at 5:15.

Travis Boyd put the Coyotes ahead 4-3 on the power play at 10:22 when he deflected Gostisbehere’s point shot in the slot. The Wild challenged for offside but the call stood after video review.

Kessel scored into an empty net at 18:41 to seal the game.