Coyotes set to welcome Jets for first game at ASU 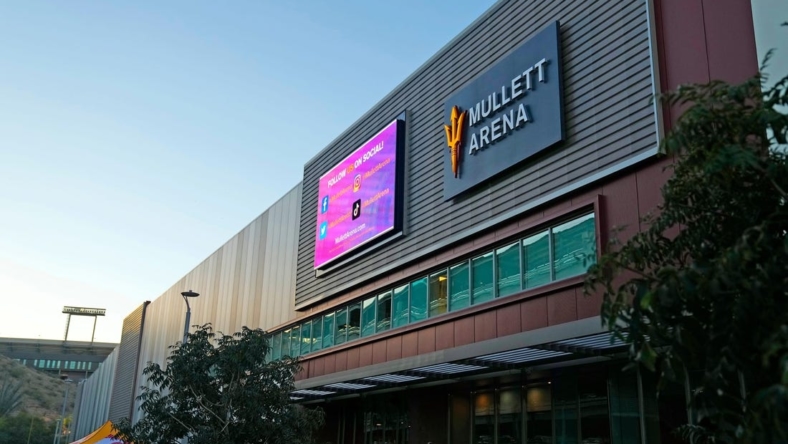 After playing their first six games of the season on the road, the Arizona Coyotes are looking forward to their debut in the cozy confines of Mullett Arena in Tempe, Ariz.

“It’s a new chapter of hockey in Arizona and in Tempe,” Coyotes forward Clayton Keller said. “I think everyone is excited and there will be a lot more eyes and a lot of people talking more about hockey.”

The Coyotes were basically thrown out of their old home, Gila River Arena, which refused to renew their lease.

The team is negotiating with Tempe for a new arena, with the City Council expected to vote on that late next month. In the meantime, the Coyotes have a three-year deal with Arizona State to play in what will be, by far, the NHL’s smallest venue.

“It’s good because (fans will) be able to see how fast the game truly is,” Crouse said. “To have all these seats in the lower bowl, they’ll pick up on how quick we have to make decisions.”

The Coyotes held their first practice at the new arena on Thursday.

Forward Christian Fischer said the ice “is better than almost any ice we played on these last six games.”

The Coyotes are embracing being on campus, creating a section strictly for Arizona State students that will be known as “Coyotes U.”

“I expect it to be loud,” Coyotes rookie Dylan Guenther said. “The younger crowd is a bit more rowdy, and with it being a tighter atmosphere, I think it’s going to bring energy, and I think that’s something we’re going to feed off of.”

“I probably wouldn’t want to be a visiting team playing in this building,” Fischer said. “I think it’s going to be a tough place to play. As small as it is, it’s still going to be crazy loud.”

The Coyotes went 2-4-0 on their season-opening trip, but they return home with some momentum after a 6-3 victory over the Columbus Blue Jackets on Tuesday.

Shayne Gostisbehere scored twice at Columbus while Zack Kassian, Jack McBain, Crouse and Guenther also scored for the Coyotes. Clayton Keller had three assists and Connor Ingram stopped 30 shots for his first win of the season.

“We capitalized on our chances, and then we played well defensively,” Arizona coach Andre Tourigny said.

The Jets will be playing the second half of a back-to-back set after registering a 6-4 road win over the Los Angeles Kings on Thursday.

The Jets rallied after trailing 3-1 to win consecutive games for the first time this season, but it wasn’t always pretty.

“At the end of the day, (Hellebuyck) made some huge stops for us, kept us in that game,” Jets associate coach Scott Arniel said. “I know it’s not VHS tape, but it’s in the garbage and we’ll just put that one aside.”

At one point late in the first period, the Jets had been outshot 16-1.

“The mood is get packed up and get ready to rock and go to Arizona,” Schmidt said. “If you get a win in a building like this after starting the way that you did, there are some good things to say about that as well.”