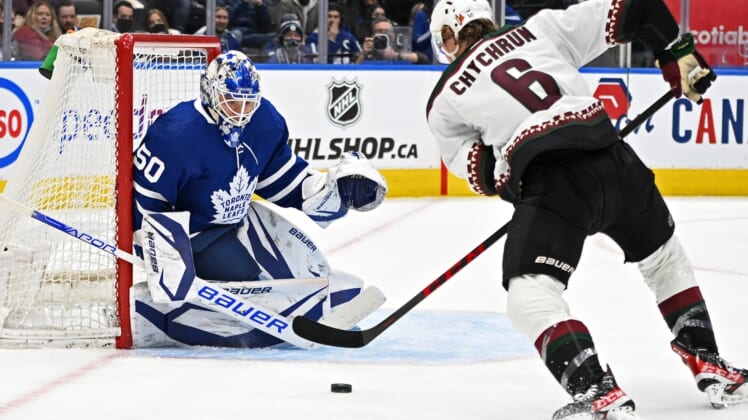 Jakob Chychrun scored his second goal of the game at 2:17 of overtime and the visiting Arizona Coyotes defeated the Toronto Maple Leafs 5-4 on Thursday night.

Toronto scored three straight goals in the first 8:17 of the third period to tie the game at 4 and force overtime. In OT, Chychrun scored his seventh goal of the season, from the left circle on a pass from Matias Maccelli.

Alex Galchenyuk recorded a goal and an assist for the Coyotes, who have won four straight. Travis Boyd and Christian Fischer also scored for Arizona. Maccelli added two assists.

Petr Mrazek allowed four goals on 12 shots before Erik Kallgren made his NHL debut in the second period and notched eight saves.

Scott Wedgewood made 34 saves for Arizona.

Galchenyuk, a former Maple Leaf, scored his fifth goal of the season when he put in the rebound from Riley Nash’s 44-shot shot at 2:09 of the first period.

Chychrun scored when his flubbed shot from the right circle dribbled over the line at 4:21 of the period.

Boyd, another former Maple Leaf, scored his 12th at 1:08 of the second period. He batted the puck on his backhand before it went in off a Toronto player.

Engvall scored his 10th at 4:55 of the second, on his second whack at the puck in a scramble around the net.

Fischer scored his fifth of the season on a shot from just above the right circle at 11:57 of the second. Kallgren replaced Mrazek after the goal.

Kerfoot started Toronto’s rally by scoring his 10th at 3:38 of the third period, on a high shot from above the right circle.

Matthews scored his 44th goal at 8:07 of the third, although play continued for several seconds before a video review determined that the puck had crossed the line. Nylander tied the game 10 seconds later with his 23rd goal.

Toronto’s No. 1 goaltender, Jack Campbell (rib injury), was not available.