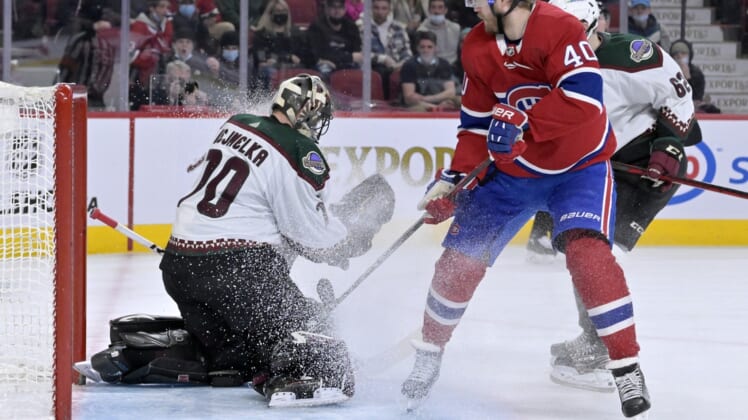 Lawson Crouse and Clayton Keller each had a goal and assist and the Arizona Coyotes used a four-goal first period to beat the host Montreal Canadiens 6-3 and conclude a 4-1-0 road trip on Tuesday night.

Barrett Hayton, Anton Stralman, Nick Ritchie and Crouse each scored in the first for Arizona, which posted those four goals on seven shots in the period.

Crouse, who recorded his first career hat trick Monday in a 5-3 win at Ottawa, assisted on Keller’s second-period goal. The Coyotes were outshot 39-19 but won for the sixth time in seven games.

Nick Schmaltz extended his point streak to a career-high seven games with an empty-netter.

Cole Caufield scored twice over an eight-second span late in the second period, and Laurent Dauphin also had a goal for the Canadiens, who are 1-2-1 since winning seven of eight.

Montreal goaltender Sam Montembeault was pulled after yielding those four in the first.

Despite this back-to-back scenario, the Coyotes didn’t look tired while scoring twice in the first 3:52 minutes. Hayton slid the puck through the legs of Montembeault just 1:57 into the game. Less than two minutes later, Stralman got a perfect pass from Riley Nash to put Arizona up 2-0.

Montreal cut its deficit in half with 6:22 left in the first, when Dauphin got just enough of his stick on the puck to beat the Coyotes’ Karel Vejmelka (36 saves).

Arizona, though, scored twice in the final 1:26 of the frame. Ritchie recorded his fifth goal in nine games since being acquired from Toronto. Then Crouse beat a battered Montembeault top-shelf.

It looked as if the second period would end without a goal, but Keller found a seam in the high slot and blew a wrister by Montreal backup Cayden Primeau (10 saves). The power-play score with 2:11 left was Keller’s team-leading 26th goal.

Caufield made things interesting via his own power-play wrister with 1:13 remaining. He then scored off the faceoff for his third goal in two games.