Coyotes down Panthers for first win at new home venue 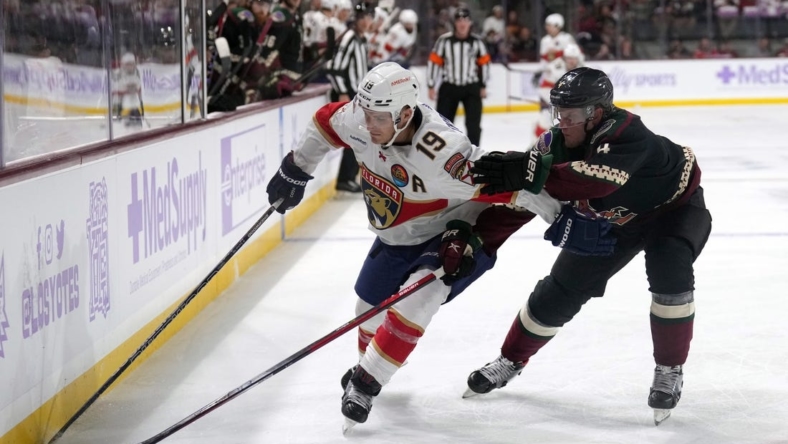 Karel Vejmelka made 41 saves and Clayton Keller had a goal and an assist as the Arizona Coyotes picked up their first win in three tries at new Mullett Arena with a 3-1 victory over the Florida Panthers on Tuesday in Tempe, Ariz.

Nick Ritchie and Lawson Crouse also scored for Arizona, which snapped a two-game losing streak. The Coyotes, who play 20 of their first 24 games on the road while a locker room annex is being finished, are slated to play in the 5,000-seat arena on the Arizona State University campus for at least the next three seasons until a proposed new arena in Tempe is built.

Colin White scored a goal and Spencer Knight stopped 18 of 20 shots for the Panthers, who were playing the first game of a four-game Western Conference road trip that continues on Thursday in San Jose.

Florida, which compiled a total of 109 shots on goal in its previous two games, including a franchise-record 58 in a 5-3 victory over the Ottawa Senators on Saturday, managed just five shots in the first 18 minutes on Tuesday. The Panthers were outshot 8-7 in a tight-checking, scoreless first period.

The Panthers picked it up in the second period, outshooting the Coyotes 16-3, but both teams managed a goal with Florida also hitting the post twice.

White made it 1-0 at 8:24 with a waist-high deflection of a Josh Mahura shot from the left point in the slot. It was his third goal of the season.

Florida had a 10-0 edge in shots in the period before Arizona tied it on Crouse’s power-play goal, a wrist shot from the edge of the left circle under the left arm of Knight for his fourth of the season.

Florida had a chance to retake the lead early in the third period, but Rudolfs Balcers’ rebound shot from the bottom of the left circle caromed off the left post.

Arizona took a 2-1 lead a few minutes later with another power-play goal, the team’s 11th in nine games. At 8:55, Ritchie scored with a wrist shot from the top of the slot that sailed by Knight’s glove side for his fourth of the season.

Knight was pulled for an extra attacker with 2:28 remaining, and Vejmelka turned away a flurry of shots before Keller sealed it with an empty-netter with 67 seconds to go. Keller has three goals this season.